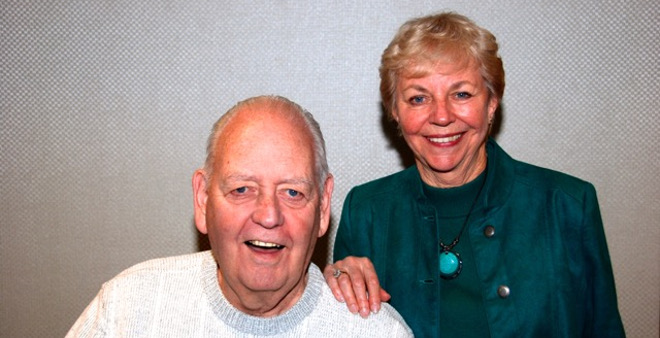 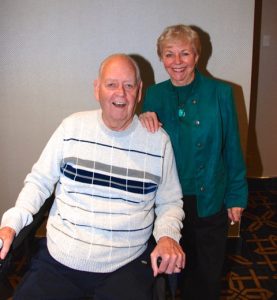 The first sign came in 1969, when Bill and Norine were basking in the glow of their son’s birth. Bill faltered on his way to the kitchen. He lost his balance and stumbled into a wall and his vision went blurry.

Norine jumped to action to call an ambulance. The diagnosis came days later. Bill had MS. Life was about to change drastically.

Married in 1963, Bill and Norine had a clear vision of their future. They were passionate travellers, so they pooled their money together to buy a camper. They dreamt of sightseeing adventures through Canada and the US. They had a clear plan for a small family, and were over the moon when their first child arrived.

Norine worked in the office at Kodak but quit to stay home with her son. Bill worked as a photo engraver, a job that involved intricate work with his hands. For a while, their plans remained on track. Bill was able to hold his job for 12 years after his diagnosis, but the ravages of MS started to catch up to him. His hands could no longer do the work and fatigue made it impossible to focus. Being a proud man, Bill tried working inventory at the airport, but even that became too much. He went on disability pension in 1982 and Norine was forced to take a full time job as an administrative assistant.

Other sacrifices followed, including selling off their beloved camper and Bill’s sailboat when he could no longer maintain his balance on the boat. Norine knew how devastating that was for Bill and wanted to make sure he would always have a refuge. They upgraded the family cottage to prepare for Bill’s impending limitations. It remained their sanctuary until the day Bill died.

Managing a full-time career and raising a family left little time for Norine to maintain her own identity. Thankfully, she worked close to home. But this also suspended any ambitions of moving up the career ladder.

Norine became fiercely pro-active, contacting the Community Care Access Centre (CCAC) who were able to supply her initial support. They began with a twice-weekly visit for someone to check in on Bill at lunch time for an hour. At this point, Bill developed additional conditions including colitis and diabetes. As the needs increased, she also applied to the March of Dimes, who was able to supply additional weekly support. Norine relied on family and friends to fill in the gaps. Sadly some friends simply disappeared when the going got rough but the many who remained were invaluable.

By 2000, Bill could no longer stand on his own: this created the need for additional equipment and care, such as a power wheelchair and a ceiling lift. Between 2000 and 2015, Bill’s need for caregivers increased from 5 to 17 visits per week. They were there to get Bill up in the morning, shower and dress him and put him to bed nightly.

Even with the increased support, caregiving was like a second full-time job for Norine. In 2006, when a case worker told them they would cut back on Bill’s visits, Norine fought tooth and nail to maintain his care and keep him at home.

With Norine’s perseverance, Bill was able to live a rich life despite his diseases. He died in 2015, at the age of 76, from pancreatic cancer. Shortly before his death, Norine asked Bill if he had ever regretted his life with MS.

The statement perfectly summed up Bill’s strength and dignity. As Norine says, “How could I be weak when Bill was so strong.”?

Norine knew how her path could have been easier with access to Federal and Provincial caregiver benefits. She knows first hand that we must make increased benefits and supports for our caregivers a clear priority. We agree: no one should be forced to make the sacrifices that Norine made to keep her family together.

Huge gaps in caregiver supports are still with us today. 35% of Canada’s workforce provides unpaid work while working. CARP needs your help in the fight for caregiver supports. Please add your voice to our Caregiver Campaign (carp.ca/campaigns/support-for-caregivers). Together, we can make sure people like Norine never have to face this alone again.