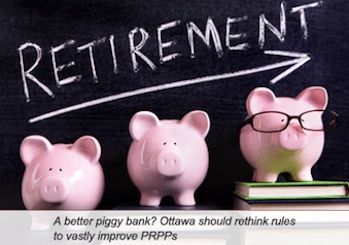 “I don’t have a problem with the structure of a PRPP—it has better options, operates efficiently—but you lose all advantages when you stream below-average income earners into the wrong vehicle.”

For example, Hamilton said if someone works full time for minimum wage for her whole career and retires at 65, in retirement she would actually make more in retirement than in her working years. “[At minimum wage], your [annual] take-home during your working life is $17,500. When you retire, your take-home will be $18,100. Government programs will replace 104% of your income, without savings.”

Even someone making an average income of $40,000 is better off saving in a tax-free savings account (TFSA), he says. Someone making $40,000 a year should save $1,600 a year in a TFSA. While the person is working, his annual after-tax income is about $30,000. In retirement, his savings, combined with current government subsidies, would replace about 85% of his working income.

“The structure and idea [of the PRPP] is fine, but the defaults are all wrong,” Hamilton said. “It’s fine for wealthy people and those making way above the average worker. [But], if we exploit low-income earners, it won’t be good for anyone.”

Hamilton and Eng both agree that it is the middle-income earners who need the most help and that the current PRPP isn’t the solution.

“The government should have done more asking first,” before introducing the PRPP legislation, said Eng. “Most low-income earners don’t stay low income their whole lives. But low-income earners are not an interesting group to politicians or industry. Those who are most concerned are those who have above-average income, who need help in retirement.”

Hamilton suggested a PRPP with no contributions for the first $40,000; however, he admitted that the challenge would be defining what the contribution rate should be—resulting in the wrong rate and the wrong tax shelter for most people.

But not everyone sees the PRPP in this way. Bill Tuffs, founder of Fair Pensions for All, a group that promotes responsible investment by pension funds and fund managers, thinks the PRPP is the best option on the table right now. His main concern is seeing it come to fruition. “It doesn’t look like there is any movement with PRPPs across the country. If we don’t do something, the political reality is that we will be back to expanding the CPP system.”

In his opinion, revamping the CPP is an expensive move that would result in a “complete socialization of the retirement system.”

Despite the gaps, the Canadian retirement system compares well on a global scale. Hamilton suggested that people look at the U.S. or the U.K. “I don’t think anyone would want to trade, but we’ve increased complexity to what should be a simple system,” he said.