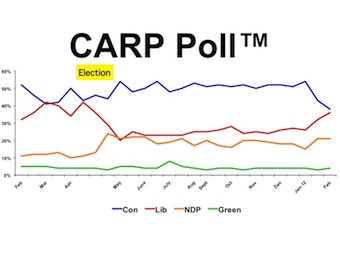 February 24, 2012: Members not only make it clear that raising the eligibility age for OAS will erode their long standing support for the government, they indicate through their voting preference that many have already abandoned the Conservative Party for the Liberals.

They agree both government and opposition MPs should vote their constituents’ will on this issue or vote against the government. Many think full public hearings should be held before a majority government passes legislation it didn’t run on in an election, and the vast majority agree this is important to them.

Members agree that complete overhaul of the pension system to reduce reliance on OAS is preferable raising the age of eligibility, but are less apt to agree OAS costs can be covered by health care savings alone.

While members do not agree that savings to health care are adequate to make up for any short term overruns in OAS payments, they do agree that a complete overhaul of the pension system is preferable to tinkering with OAS.

The majority of members say they would have invested in PRPPs had they been available at the appropriate time, but most agree doubling CPP contributions and benefits is preferable to PRPPs in solving pension problems.

Due entirely to the OAS issue, the Conservative party has been reduced from their two-to-one lead over the Liberals a month ago to the point where the parties are statistically tied now.