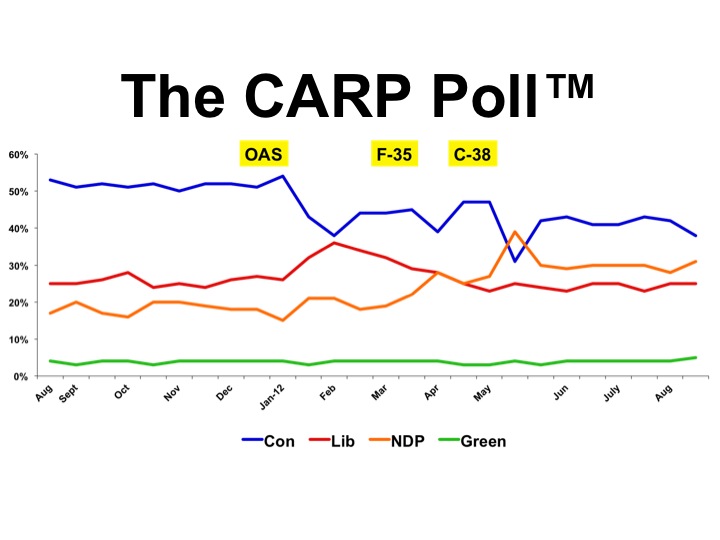 To download the full report and detailed analysis complete with all tables and charts, please click here

September 1, 2012: CARP members are not convinced the system is as democratic as it should be, and many feel shut out by the current government. They call for more openness and transparency in government, as well as more of a role for opposition parties and voters.

Relatively few members think Canada is a more democratic country than other western nations, and majorities call for our parliamentary rules and procedures to be codified in law.

Members agree prorogation of parliament should be reserved for its intended purpose of ending a completed session of parliament. They agree imposing prorogation should require an unprecedented two thirds majority vote, or that the PM and the Governor General and government must agree to prorogation.

Three quarters agree Canada suffers from a democratic deficit, and most say this is because too much power is concentrated in the PMO.

Most agree our first-past-the-post electoral system disadvantages smaller parties, and half or more opt for Alternative Vote (AV) or Proportional Representation (PR) systems. Nonetheless, members are happy with the Queen as head of state.

Three quarters agree there should be more checks and balances on a majority government and, surprisingly, most think the Senate is the body, if reformed, to do this.

The vast majority agree patronage appointments and central party nominations should be eliminated, three quarters think Canada’s “fixed” election dates should become truly fixed, a majority believe organized voter suppression exists in Canada and many want it punished by jail time, or by by-elections, which is now the case.

The Conservative party, while leading in voter preference, continues to lose points to the NDP, now in second place, but gaining steadily.

To download the full report and detailed analysis complete with all tables and charts, please click here