September 21, 2012: CARP members are very politically engaged, all voted in the last federal election, all will vote in the next federal election and very few claim they are not interested in politics. While the majority plan to vote for the same party they did last time, a significant minority do not know if they will.

Two thirds think the expansion of parliament by 30 new BC, Alberta and Ontario seats is a good thing for democracy, and most find themselves most engaged in federal or provincial politics, or both.

While the Conservatives are preferred for being competent, offering a vision for a prosperous Canada and protecting the interests of consumers and investors, the NDP is seen to be the most likely to fight for all of CARP’s core advocacy issues, including home care, end-of-life care, CPP enhancement, OAS protection, ethical government behaviour, caring about average Canadians, a national drug coverage plan, national standards and accessibility for health care and ending elder abuse.

Despite this ringing endorsement of the NDP’s commitment to core CARP values, most members say they will support the Conservative Party if an election were held tomorrow. While they recognize that the NDP’s social equality agenda will best align with CARP’s positions, their voting decision may be more dependant on the economic stewardship they see in the Conservatives, and for which they gave them high marks in this poll. Conservative supporters are more enthusiastic about voting for their party than other party supporters.

An important phenomenon to note is the extent to which the Liberal Party has disappeared from member consideration.

The Conservatives are in the lead in voter support, as mentioned, with the NDP in second place and catching up. The Liberals are firmly in third place and falling back. 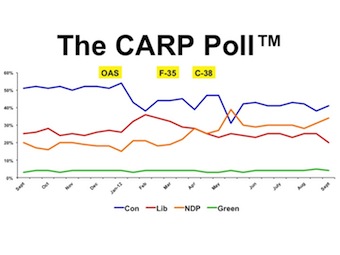