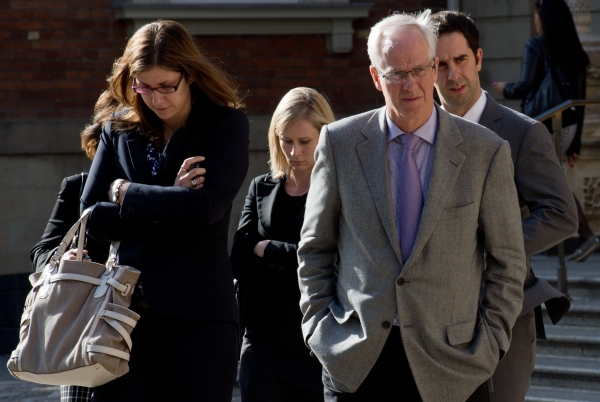 TORONTO — The former top brass at Nortel were found not guilty Monday of falsifying financial records as part of what the Crown alleged was a widespread, multimillion-dollar fraud at the fallen Canadian technology giant.

The three had pleaded not guilty of manipulating the balance sheets at Nortel Networks Corp., between 2002 to 2003.

“I am not satisfied beyond a reasonable doubt that Frank A. Dunn, Douglas C. Beatty and Michael J. Gollogly deliberately misrepresented the financial results of Nortel Networks Corporation,” Justice Marrocco said in his ruling.

“Therefore, I find each of them not guilty of counts one and two in this indictment.”

The verdict comes nearly a year after one of the largest criminal trials in Canada’s corporate history began.

While Dunn did not address the media outside court, he released a statement saying he was “grateful to have received vindication.”

“For a very long time, integrity has been the foundation of Nortel Networks’ corporate governance and business practices. The documentary evidence and testimony re-affirmed this core value that I witnessed over my 28 years with the company,” he said.

“I am looking forward to turning the page on this chapter of my life.”

Outside court, Beatty smiled and replied, “Yes, I am,” when asked if he was happy to be moving on with his life.

His lawyer, Greg Lafontaine said the ruling vindicated his client.

“We’re ecstatic with the results,” he said. “It’s a great judgment… There was no fraud at Nortel.”

At its height, Nortel employed more than 90,000 workers worldwide and was worth nearly $300 billion. During the technology boom in 1999-2000, Nortel was one of Canada’s most valuable companies, with its shares peaking at $124.50.

In the years that followed the accounting scandal, the company’s shares nosedived to penny-stock status amid falling sales, large debts, and a gamut of legal issues.

In 2009, Nortel filed for bankruptcy in North America and Europe, shedding thousands of jobs.

Since then, it has sold its remaining businesses piecemeal to various buyers for more than to US$7.8 billion, one of largest asset sales in Canadian history.

At trial, Crown prosecutors alleged that Dunn, Beatty and Gollogly were complicit in releasing accruals — money set aside to cover future liabilities — onto Nortel’s balance sheets during quarters that needed to show the beleaguered telecom company was turning a profit when it wasn’t.

The Crown argued that these decisions by the accused, which were kept from the board of directors and the firm’s investors, generated return-to-profitability bonuses for themselves even though the company was in the red.

The defence said there was no evidence that the accused were involved in a conspiracy with countless accredited accountants from Nortel and outside auditors Deloitte & Touche.

Dunn’s lawyer also told the court that as CEO, his client approved the accounting at the telecom equipment maker but should not be held responsible if the figures given to him were inaccurate.

At the time, Dunn was preoccupied with trying to save the company and trusted that the balance sheets were correct when he approved them, argued the defence.

But the Crown charged, unsuccessfully, there was blatant falsification of financial records while the accused were in charge.

In one instance, the company had $189 million in excess accruals, but the Crown argued it only released $80 million so it could boost numbers during the first quarter of that year, while holding onto the rest for use in future quarters.

It was also alleged that a year earlier, Nortel’s own accountants were aware of $303 million in cash reserves that were held without a legitimate reason.

The verdict came on the same day that mediation talks on the distribution of nearly $9 billion in assets from the now-bankrupt Nortel were set to begin in Toronto.

The week-long proceedings, headed by Ontario Chief Justice Warren Winkler, are part of an effort to settle the company’s creditor claims in Canada, the U.S. and around the world.

About 100 lawyers were expected to attend the talks, including those representing Nortel pensioners, disabled former employees, bond holders, trade creditors and governments.

Last April, Winkler says one of the challenges he will be facing in analyzing the proposals will be that the claims are greater than the company’s residual assets.

Two other efforts to mediate settlements have previously failed.