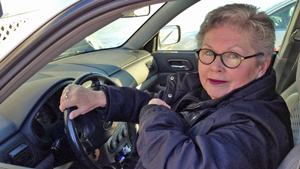 Police in Sudbury, Ont., wanted the phone to ring on a hotline to report bad driving by older people, but now officers are dealing with calls from angry seniors.

Getting people to call the Crime Stoppers tip line stems from a safe-driving task force launched at the end of January by the Greater Sudbury Police, the OPP and other community groups.

It was set up for people to call and anonymously report sightings of people who appear to be driving dangerously, but police recently put an emphasis on reporting older drivers. Police say the number of seniors getting into collisions is almost on par with those of drivers aged 24 and under.

A plainclothes police officer would then be sent to the home of a senior driver reported on the tip line to talk about any issues and offer help.

Police said it’s part of an effort to encourage proactive discussion with seniors about when it may be appropriate for the elderly to stop driving.

But for Sudbury seniors like Darleene McCormack, having a police officer show up at her front door is anything but proactive.

“So it would be a fear factor of, ‘What happened? Why is the policeman here?’ And then, when the policeman says it’s about my driving, I would probably be very shocked,” she said.

‘Hearts were in the right place’

But Greater Sudbury police Chief Frank Elsner said that was never the intent, and the initiative was meant to give families a much-needed tool to have the unsafe driving talk with their loved ones.

“The vast majority of complaints we get, not through the tip lines, but just directly to us, are from family members that do not want to have that very difficult conversation with their mother or father,” he said.

“So we get the call and then we’re the bad guy.”

Elsner said he’s sorry the messaging for the campaign offended some seniors.

“Our hearts were in the right place, it had nothing to do with targeting anybody, any specific segment of our population,” he said, noting that police home visits are not enough for an officer to take away a person’s licence.

“We would have a better and more thoughtful approach to dealing with those individuals, and not from an enforcement policing perspective. And unfortunately, the way that the message got rolled out, it was the exact opposite. And for that, I’m very sorry.”

‘Many poor drivers on the road’

McCormack said having people calling in reports on seniors is cruel.

“[I’m] totally appalled that they would focus in on one group when there’s so many poor drivers on the road,” she said.

National seniors’ advocacy group CARP said calling Crime Stoppers is too much like ratting people out.

“To report on your own relative because you think they shouldn’t be driving seems to be virtually an abuse of a public service,” said CARP vice-president Susan Eng.

“I would hope that the police officers would have a lot more to do with their time.”

Elsner said the original intent was to expand this task force across the province, but now he’s not sure that’s still the plan.

He added people can call Crime Stoppers to report dangerous driving — whether the person behind the wheel is 18, or 80.

“What we want to make sure is that the specific individual driver is the one that we focus on and not that we start broad sweeping various segments of our population.”