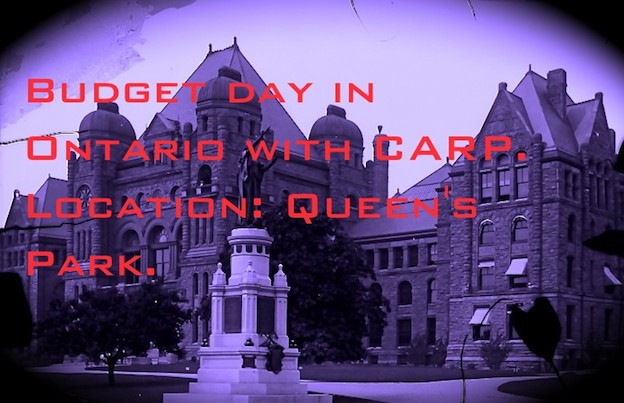 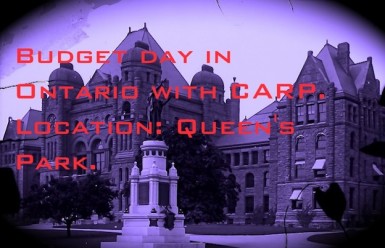 May 3rd, 2013: The Ontario government released the 2013 provincial budget yesterday and CARP staff was at the frontlines to see how it addresses the concerns of older Ontarians. CARP members will welcome Ontario’s recommitment to working with Provinces and the Federal Government to enact a modest enhancement of the CPP, new investment in home care, and a reduction in auto insurance rates. But the budget failed to set the minority government’s vision for aging in Ontario. The budget did not adequately address a number of CARP members’ priority concerns – seniors’ poverty, equitable access to affordable drugs and ending ageist auto insurance and driver testing policies.

More funding and service targets for home and community care

CARP advocated for Ontario to target first dollar drug coverage for all Ontarians starting with coordinated price negotiation and bulk buying to reduce cost burden of drugs. Although the budget took no further action on pharmacare, it announced good news for home and community care. Funding for home and community care will increase by 1% and new targets for service delivery will be introduced. As a result of the 1% increase, in addition to last year’s 4% increase, a total of $260 million will be allocated to home and community care for 2013-2014. It is unknown how this money will be allocated but CARP will continue to monitor as the Ministry is expected to provide a breakdown.

CARP had asked for increased income supports especially for single seniors, equitable access to affordable drugs, and eliminating discriminatory insurance rates that disadvantage older drivers along with discriminatory licensing policies. However, CARP was disappointed that the budget did not adequately address these priority concerns and found the overall budget lacking a coherent vision for aging in Ontario.

CARP welcomes the promise to reduce insurance rates by 15%, as it will save the average driver over $200 a year, but had hoped that the budget would include concrete steps to modernize how older drivers are tested and licensed and covered by insurance. For example, insurers are permitted currently to charge 80-plus drivers higher premiums, regardless of experience and driving record.  Driver assessment, testing and licensing is also age based, and often fails to account for driver competence. Moving forward, CARP will continue to call for evidence-based driver improvement programs and interventions that would bridge the gap between the competing concerns of road safety for all road users and the preservation of independence and dignity for older drivers.

CARP welcomes the efforts made on pension reform, home and community care, and auto insurance rates, however, the budget lacks an overall comprehensive vision for aging. It did not address the need for income supports for seniors living in poverty, especially single seniors, nor did it touch on the need for help older workers engage in the workforce. Instead, the budget appears to have been created to garner opposition support and to prevent a looming election. CARP will continue to urge Ontario to take on greater leadership in paving the way for a comprehensive vision for aging.

Read CARP’s pre-budget submission to the Ministry of Finance