Summer Recess is Over Folks... Now Let's Get those Parliamentarians Working! - CARP
Join Donate Sign In 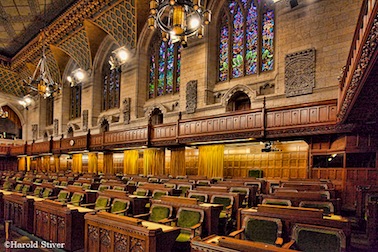 If you enjoyed the Senate scandal, then you probably enjoyed watching the Big Three Telcos whining about fairness in full page ads. It’s all part of the reality TV that passes for good government and a sound economy these days.

Maybe things are so good in Canada that we have to manufacture outrage with tacky, petty larcenies offered up by the most powerful in our midst.  After all, a British lord purloined public money to repair his moat for heaven’s sakes!! Moats! – not expense claims for meetings that never happened or a home that wasn’t there – but somewhere else.

This sense of entitlement surely can’t be a new phenomenon but it seems that Parliamentarians use to have the decency to be embarrassed when caught. Now their prevarication has cost us money and resources to uncover the truth – not to mention the entire Spring sitting of the House of Commons.

Perhaps we didn’t mind so much in the past when it might have seemed that important public issues got fully debated in Parliament, that minority voices were heard even if the government had a parliamentary majority and that we could count on a few good ideas at the end of the session that would make our lives better. We didn’t feel the need to take to the streets in protest. After all, our Constitution begins with the exhortation to “Peace, Order and Good Government”.

Parliamentary rules were always vague- depending on Parliamentarians to honour the spirit of them even if the wording was ambiguous. That this decency seems to have flown out the window should come as no surprise. It disappeared around the same time we last heard a Prime Minister say he would govern for all Canadians, not just those who voted for his party, and believed him.

So, despite all that, did we get good government this year? It pretty much started and ended with last year’s Omnibus bill, purporting to implement the 2012 budget but somehow by rolling in environmental assessment amendments stoked the Idle No More protests. The six week long hunger strike by Chief Teresa Spence provided yet another shiny object to divert our attention from the legislative process. A net result, we learned that there’s an Island that sits in the middle of the Ottawa River across from the Parliament Buildings.

Meanwhile, back in the House of Commons, the Omnibus Bill 2012 was ultimately passed in a marathon session more notable for concern over missed bathroom breaks than substance. The opposition proposed hundreds of amendments – the sheer volume demonstrating the depths of their impotence – which were ignored or voted down by the government majority. By the time yet another Omnibus Bill was tabled to implement the 2013 budget, the only opposition left standing was the CBC which protested direct government involvement in labour negotiations of Crown corporations.

This is not how it’s supposed to be. Legislative opposition, a fundamental part of the unwritten Parliamentary tradition, has been devalued in this Parliament according to a recent book by Professor David E. Smith, Across the Aisle: Opposition in Canadian Politics (University of Toronto Press: 2013).  The Hill Times also published a column about Professor Smith’s book which points out that “constitutionally, it’s Parliament that elects governments, but the Conservatives have promoted the notion that governing parties receive a mandate from the public by holding a majority of the seats in the House of Commons”.

The parliamentary rules and traditions like Question period, required reviews by standing committees, members’ right to speak and for how long, etc. are meant to allow the Opposition to perform its proper role to hold the executive branch [even a majority government] to account and to ensure that minority interests are not ignored. The government’s authority to invoke closure and even prorogation is meant to be exercised with restraint – in deference to the legitimacy of legislative opposition.

Just ask Obama and Cameron if they’d like to have the scope of power that a Canadian prime minster holds – restrained only by self control and respect for Parliament.
And in case things couldn’t get any more ironic–after a wasted session caterwauling about senate excesses, a bill to reform the senate died with prorogation. So the NDP have embarked on a cross country tour to demand abolition of the senate – something that can’t be done even if Parliament were in perfect working order. If even the Opposition are “taking it to the people”, how much longer will Parliament be relevant?

Most Canadians just want to get on with their lives and ignore the goings-on on Parliament Hill. But then they come to realize that they need things done that only government can do, like control the cost of drugs, increase the CPP, help people slipping badly behind with no options in sight and start fixing the fractured health care system. Then, those shenanigans become an affront. And powerless to shift their attention back to the things that matter, we sit back and tell ourselves we like watching the powerful squirm.

It’s the same with the Telcos hijacking the language of fair play. Most consumers look up bleary-eyed from their cell phone bills – an extra $2 if on paper – and wonder what the Telcos would know about fair play. Maybe Canadians bought the idea that the byzantine process of government selling them the right to bombard us with stronger microwaves was somehow flawed and needed fixing but mostly, it’s a good bet that many just enjoyed watching the Telcos squirm.

So that’s what we’ve come to. We can’t get what we need, we’re powerless to change the course of events and so we resign ourselves to watching the big guys squabble with lame arguments and contrived indignation. And lap it up – through media cycle after media cycle.

Just like reality TV – there’s no reality but it’s on TV – so we watch. Especially as there was nothing else on TV – nor in Parliament either, for that matter.

Well, summer recess is over, folks. And the next federal election is two years away. If you want productive attention to the things that matter to you, now is the time to tell somebody – starting with your “elected representative” – such a quaint term – just don’t let it become irrelevant. Use CARP’s E-voice, write a letter, buttonhole your MP at local events or the constituency office.

CARP will kick off the season with a callout for more action to help older workers get and keep their jobs. Pension experts and think tanks are lining up with CARP’s call for a universal pension plan and even doctors are talking about a seniors’ health care strategy and pharmacare. In the absence of leadership from our Parliamentarians, it’s time for us to remind them what their job really is.