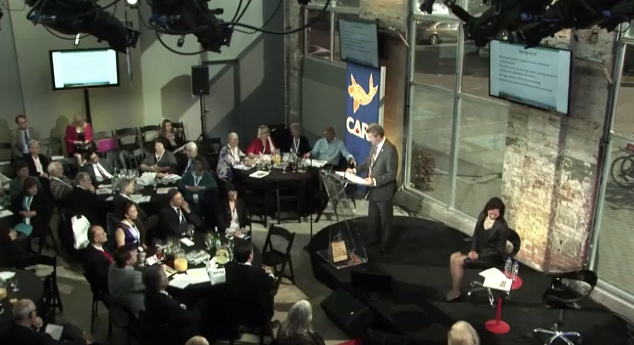 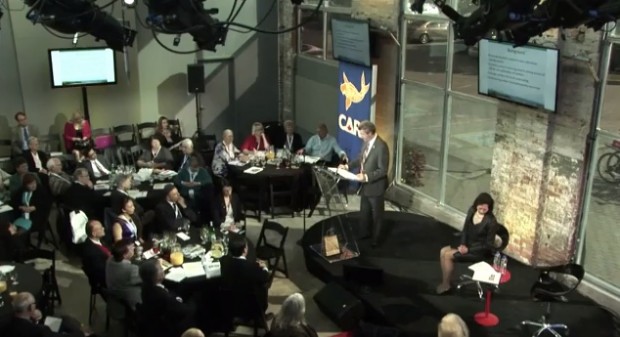 October 25th 2013: Today, PEI Finance Minister Wes Sheridan headlined the year CARP Town Hall at the CARP Annual Meeting and Chapter Congress.   Wes Sheridan is the man of the hour since he launched a new proposal to change the Canada Pension Plan (CPP) in advance of the December’s meeting of the Finance Ministers.  Minister Sheridan is clearly passionate about the opportunity Canadians currently have before them and he intends to take action at this key juncture: he has committed to rallying his provincial counterparts. Add to this the fact that Mr. Sheridan has developed a bulletproof plan that addresses all of the concerns expressed by CPP expansion’s biggest detractors.  Mr. Sheridan made quite a splash in the media last week when he announced the plan but he only provided a broad outline – leaving many a journalist to speculate about the particulars. Today, CARP was the first to be privy to details of the plan.

Minister Sheridan gave a stirring and comprehensive presentation.  He addressed the shifting balance that is seeing younger workers face less secure employment options with fewer work based savings plan while a volatile economy means market conditions can devastate a retirement plan at the drop of hat.  Add that to the fact that the government has recently taken the step to delay retirement benefits to age 67 and you have a pension landscape that looks increasingly insecure.

What the media is calling Sheridan’s “PEI Proposal” is simple yet elegant.  As Minister Sheridan explained to the assembled leadership of 52 local chapters from Victoria to Saint John’s, the Canada Pension Plan is currently designed to replace 25% of earnings up to a ceiling of $50, 000.   To achieve this premiums are placed at 9.9% of earnings, premiums are shared equally between employees and employer.  As it now stands the maximum annual benefits therefore equals $12, 000 but the average annual payout is only $6, 000; hardly a gold-plated plan!

Referencing the inadequacies of RRSPs, Sheridan said, “You can lead a horse to water but you can’t make him drink and I don’t see how adding another water bucket will address our problem.  I’ll say it before and I’ll say it again, PRPPs are a voluntary plan; employers don’t have to offer them and employees don’t have to use them.  And that’s the problem… Putting another such plan in place will not be as effective as strengthening the Canada Pension Plan… In the CPP we have a secure program that we can build upon that represents everything that a country like Canada stands for and it’s effective because it is mandatory.” 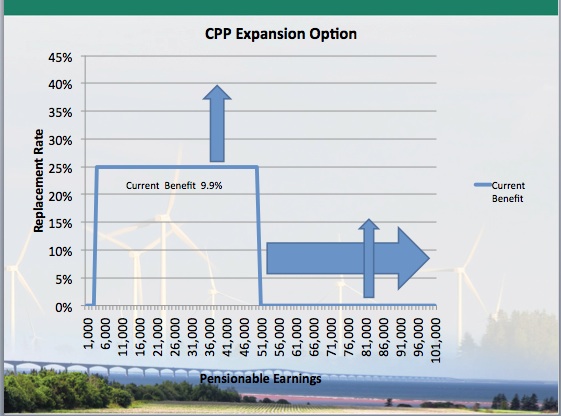 Assuming a 40-year career, for someone earning $40, 000, total premiums would increase by a total of $465 per year, shared equally ($232.50) between employer and employee.  This would yield an estimated CPP increase of $2, 250 per year at retirement. 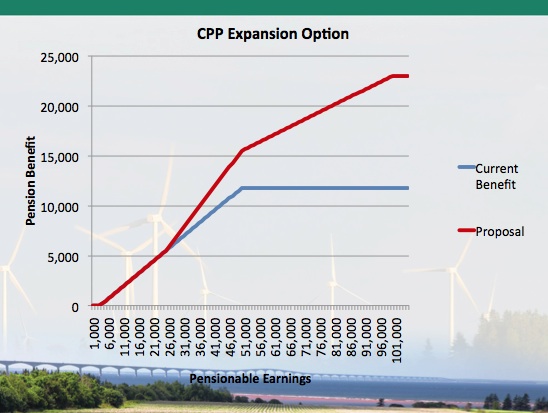 At the current maximum pensionable amount ($50, 000), an extra $775 per year split equally between employer and employee would yield a benefit increase of $3, 750 a year at retirement.

As Sheridan explained, he would see fit to wait out another 2 years to allow the economy to improve before the start of a three year premium phase-in period.  He congratulated CARP members for their selflessness saying that they are passionate about something that only benefit the younger generation of workers.

Mr. Sheridan concluded: “There are some who don’t think that this is the time to make these enhancements and I disagree.  So do many Canadians.  The attention to the proposal and this issue and this proposal continues to grow.  There are editorials and articles on this topic just about every week now… My Federal and Provincial counterparts are reading these and hearing from people like you who realize just how important the CPP is to ensuring that Canadians have a viable source of retirement income… This will be a topic of conversation when we meet this fall and I will continue to sound the bell loud and clear.  Standing by and allowing our CPP to fall is simply not an option.  I would like to share a Chinese proverb with you that I believes holds true for CPP enhancement: ‘the best time to plant a tree is twenty years ago’, the second best time is now.’  When I meet with my federal and provincial counterparts I will tell them it is time to start planting some trees.   Please spread the word – It is up to us to ensure that future generations have access to this vital retirement system.”

Following the Minster’s presentation there was lengthy Q & A with CARP members.  Mr. Sheridan addressed and defeated any prospective doubts that people might hold such as the notion that CPP enhancement could result in higher rates of unemployment.  Much discussion was had about how we could best work together to put pressure on the Provincial and Federal politicians to make this plan a reality already!

The Full Presentation and Q & A Can be Viewed Here: