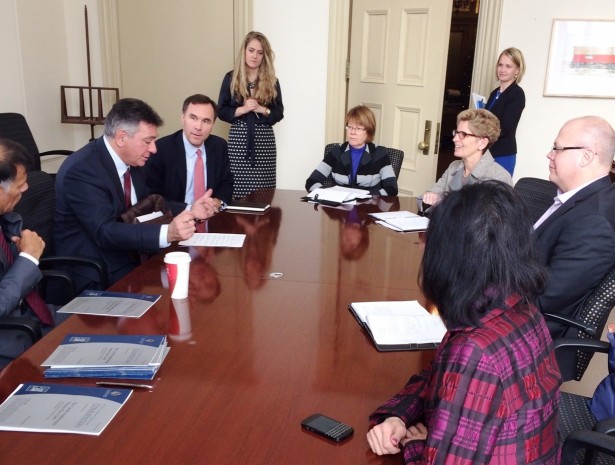 CARP met again with Premier Wynne and Minister Sousa on December 18, 2013, but this time to provide input on an Ontario-led pension plan. Earlier in the week, the federal government vetoed the decision to enhance the CPP at the Finance Ministers’ meeting at Meech Lake, but Finance Minister Charles Sousa announced that Ontario will move forward and implement its own alternative. Premier Wynne provided the following statement:

“It is so important that we work to ensure a more secure retirement for Canadians. We remain committed to CPP enhancement, but I am very disappointed that the federal government is standing in the way of this urgent issue, particularly when all provinces and territories agree. We must take action so the people of Ontario can retire in comfort, and to protect our future economic stability. That is why we will work with CARP and other valuable partners and move forward with a made-in-Ontario solution that will be both viable and responsible, and that could involve other provinces.”

CARP welcomes an Ontario-made supplementary pension plan as it will help Ontarians to save for their retirement. However, CARP cautions the Premier and Minister Sousa that certain features must be included to ensure that Ontario’s plan will be effective at providing target benefits while being sufficiently funded. CARP advised that Ontario looks at CARP’s Universal Pension Plan, as outlined in CARP’s Pension Paper, which requires professional management with low fees that is independent from government, use existing enrolment and administration mechanisms, and is mandatory with possible opt-out options to ensure a large enough pool of funds. CARP also encouraged the Premier and Minister to maintain a pan-Canada perspective as they move forward with the possibility of extending the plan to other provinces.

Although Ontario moves ahead with its own solution, the possibility of CPP enhancement still remains, and CARP will continue to advocate the federal government for the retirement security of all Canadians.