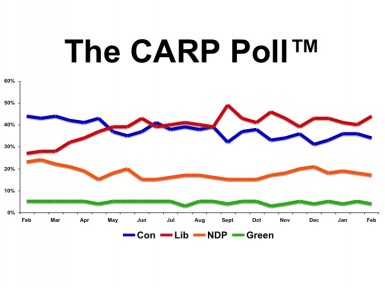 Remaining active and social is seen as the key to avoiding the onset of dementia, which may be foreshadowed by symptoms including getting lost in familiar surroundings and losing the ability to perform simple tasks.

The vast majority would seek testing from their doctor if they experienced any of these symptoms, and about a third claim they already have experienced them.

Testing, and remaining socially active are seen to be the best solutions to the onset of dementia, as well as learning about managing and living with the condition.

Three quarters are concerned about the onset of dementia, mostly for themselves and another (presumably a spouse). The majority thinks a stigma is associated with dementia in society but not in the family.

Members agree Canada is not prepared for the increase in cases of dementia that will occur as the Boomers age, and more think the Boomers are more susceptible to dementia than previous generations than think otherwise.

Members say the government could best lessen the impact of dementia by funding home care and relief, providing more access to geriatricians and training more of them. More research, which was featured in the recent federal budget, is not seen to be the highest priority.