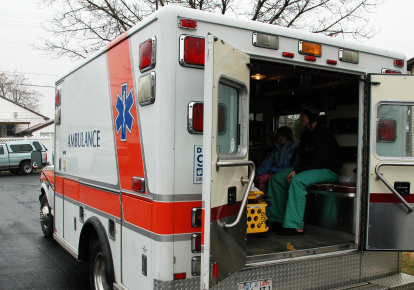 About 2,500 Nova Scotians — far fewer than expected — have applied to have their ambulance bills waived since an assistance pro­gram for low-income residents was rolled out about 19 months ago.

The number shows more must be done to make people aware of the program, Health Minister Leo Glavine said Friday.

It begs the question did we do a strong enough job in in forming Nova Scotians about this program?” he said in an interview.

When you hear of cases (such as) I didn’t call the ambulance because I knew I would have to pay the fee, that is a really disturbing fact that comes along to our offices from time to time.”

Nova Scotians with a valid health card are usually billed $142.30 for medically essential ambulance transport, according to the Health Department website.

This article was published by The Chronicle Herald on April 12th, 2014. To see this article and other related articles on their website, click here.

However, an ambulance fee appeal process that came into effect on Sept. 1, 2012, means residents of Nova Scotia who have an annual income below a certain level can apply to have their bill waived.

The former NDP government announced the assistance program in May 2012 along with some other changes such as a drop in the fee for ambulance transport between hospitals and nursing homes.

To be eligible to have their bill waived, residents must meet an after-tax low-income measure developed by Statistics Canada.

Application forms are available on the Health Department website.

Glavine said he believes the program is a good one but when taking into account the average income levels and numbers of ambulance trips, more Nova Sco­tians should be accessing it.

It challenges us to not leave it where it is,” he said. It is now incumbent that we have a strong information program.”

Of 2,495 people who applied to have their ambulance bill waived, 500 were turned down because they didn’t meet the criteria. Another 225 didn’t provide enough information to have their application processed, department figures show.

Many seniors don’t know about the assistance program, said Bill VanGorder of the Nova Scotia chapter of the Canadian Association of Retired Persons and the Group of IX Seniors Advisory Council.

(Many) don’t understand ambulance fees or the benefits of using the emergency system,” he said Friday. Even people who can afford fees still avoid calling the ambulance because they don’t want to pay.

We would like to see more promotion on what the criteria are, or the subsidy, and (on) the need for using the system.”

Government should also be aware that many seniors do not us e their computers and the Internet as a primary source of information about new programs, he said.

Doing nice web announcements is not suitable for everyone.”

Ambulance fees should be an insured health service paid for by government, said Christine Saulnier, executive director of the Nova Scotia office of the Canadian Centre for Policy Alternatives.

However, Saulnier said Friday she recognizes that it would be a challenge for the province to get rid of ambulance fees without stronger levels of federal health­care funding .

It is an issue in terms of the province to be able to do this, to get rid of it, because really that’s where we would like to see them go is actually have no ambulance fee,” she said.