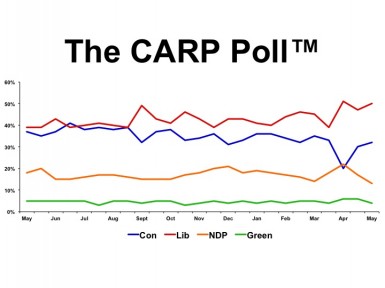 May 16, 2014: The vast majority of CARP members have pensions, two thirds are DB plans and just less than half public sector DB plans. The minority agree the proposed Target Benefit Plans (TBPs) are a good idea, and half think they are not, mainly because employers will convert existing DB plans or because no one will offer TBPs. Currently, members think DB plans and RRSPs are the best options for saving for retirement, and very few think TBPs belong in this category.

In the case of an under-performing TBP, most members would rather increase their contributions than see benefits reduced. In any even, all members believe it is very important that promised pension benefits be delivered to retirees. Very few think of CPP as a payroll tax, with most seeing it as a voluntary, member-owned plan.

Members like the Ontario Retirement Pension Plan (ORPP) and agree other provinces should offer similar plans. Many who like the ORPP think CPP should be expanded at the same time as supplementary plans are offered. The oppositions lack of support for the ORPP sways a significant minority of votes to the provincial Liberals from the PCs.

While the Liberals are far in first place, both they and the Conservatives have increased their vote share recently at the expense of the NDP.