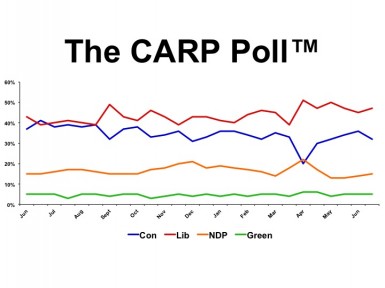 CARP members agree that LGBT seniors are more likely than not to face discrimination and homophobia as they age, but a through line to this report is that many members feel that LGBT seniors will suffer no more nor more differently than all seniors.

Most agree Canadian social services are adequately inclusive of the needs of LGBT seniors, but there is also agreement LGBT seniors will face unique problems when they enter long-term care, including separation from partners and the possibility of discrimination from residents and staff.

Almost all members have (or will have) RRIFs, and one half agree that current withdrawal rules put them in danger of outliving their savings, where half as many do not agree. Half want the mandatory withdrawal rules eliminated and fewer want the amount of the withdrawal reduced. When asked directly two thirds agree mandatory RRIF withdrawals should be done away with entirely.

The Liberals have increased their vote share at the expense of the Conservatives, and the NDP remains in third place.