The Middle-Aged Guide to Growing Up: Star Gazer - CARP
Join Donate Sign In 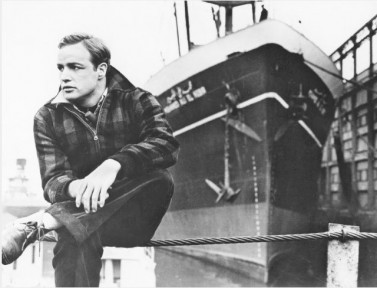 I’m a boomer, born the year On The Waterfront won the Oscar for Best Picture (and Best Actor for Marlon Brando, Best Director for Elia Kazan, Best Supporting Actress for Eva Marie Saint and Best Screenplay for Budd Schulberg). These are all artists I admire (worship?), mostly for their integrity. It must have been a good year for film, and I hope some of it rubbed off on me.

I’ve been an actor most of my adult life (along with all the other jobs I’ve done), and I’ve had my share of run-ins with other artists of the stage, screen and TV.

In the early 80s, I got my Equity card and worked on a production of Tennessee Williams’ Night of the Iguana. In the next theatre over, Len Cariou was doing the Scots Play (which must not be named). Now he plays a grandfather on Bluebloods, but he was a strapping young man then. He specialized in curtain calls. Intricately choreographed, they were often the high point of his performances. For this play, he had devised an ingenious one. After the last scene, he’d rush off stage and dunk his head in a bucket of water. When he came on for his bows, the lights behind him would come up, and the ones in front would go down. He’d stretch his arms out to either side like a man crucified, and throw himself forward from the waist. This would create a halo of water drops that would explode in the lights and drench the first few rows. Very dramatic stuff.

I’d seen him a year or two earlier at Stratford doing Coriolanus. His bow for that play was more complex. He’d come on slowly, wearing his long Legionnaire’s cloak, then, thrusting one leg forward, sink back on his other knee and hide his head under his cloak, as if apologizing for an unspeakable act. More dramatic!

I was camera stand-in for, among others, Ian McShane who later became so foul-mouthed as storekeeper Al Swearingen in Deadwood. He called me his “doublier”, a euro-affectation I found charming. He taught me an important lesson. Shoes are important. “You can be well-dressed in rags if you’re wearing a well-built pair of shoes”. He favoured heavy-duty ventilated wing-tips. I’ve followed his advice ever since, always making sure I’m wearing good footwear for auditions.

During this period, I was also a camera stand-in for Rip Torn, before his Larry Sanders and Men In Black days. Now, in those days, Rip didn’t work after 5 PM, when he had a standing date with Mr. Jack Daniels. I was notorious on set for my mimicry, including my perfect take on Rip’s guttural growls. Rip was doing John Huston, and I was doing Rip doing John Huston, so it was all very meta. “I lit Bogie with a slash of light, I can do the same with a god damned bottle of beer!” was my favourite line. As it turns out, I got to do Rip for camera. I’m the same size (somewhat younger). Near the end of the shoot, they had to pick up some lines including a couple of reverses of Rip (shots taken from behind the actor). It was past 5 PM on one of the last days of the shoot and Mr. Torn wasn’t available. I was put into his costume, shot from the back, and did the lines in my best Rip voice. They’re there in the finished movie, but I dare you to tell which ones.

I starred on Littlest Hobo with Keenan Wynn, who had played Col. “Bat” Guano in Kubrick’s Dr. Strangelove. He told amazing stories of the shoot. “I was staying at the Dorchester in London when Stanley gets on the elevator. “Keenan” he says “are you in town for a few days? Come and be in my picture”. I went up to Pinewood the next day for costumes, and the day after that I was on the set. There was no script, you know, Terry Southern and Stanley were writing it as they went along. I got to improv most of my lines, including when I say “You think I go into battle with pocket change?” and “You’ll have to answer to the Coca Cola company for that””. So much for the image of Kubrick as the uber-control freak, obsessing over every shot.

Other tidbits: Robert Michener did a Movie of the Week in Toronto on which I was an extra. I saw his script. Whole pages were stroked out – “NAR”, for “no acting required”.

I met Edward James Olmos back in 1980, when he was Ed Olmos and hadn’t done Bladerunner yet. He was making his living mostly playing poker.

I was camera stand-in in a mini-series starring Lesley Ann Warren. She was supposed to age from 20 to 80 in the picture, but as it went on (it was being shot chronologically) she refused to go grey. Her hair just got blonder and blonder as the shoot went on. One day she came out of her trailer, impeccably costumed and made up, sneezed daintily and deposited about a gram of coke on her upper lip. The good ol’ days.

I met Saul Rubinek on a plane and told him I liked his work in Unforgiven with Clint Eastwood (he was the reporter who pees his pants). He wasn’t that happy with my admiration, and I realized Ned Beatty probably felt the same way when people congratulated him on Deliverance.

I was in a show with Shirley Douglas, and opening night, her father Tommy came. I was starstruck. The father of Medicare! I wanted to talk to him about the doctors’ strike in Saskatchewan, but all he, a former bantamweight boxer, wanted to talk about was the Ali-Holmes fight that night. As it turned out, Ali lost, and only fought once more. Shirley’s kid was there too, gangly boy named Kiefer, about 12 or 13 years old.

One last inspiring story; Tom Selleck was blackmailed in Toronto by a jealous hairdresser who bugged his trailer. Tom told the craft union “I don’t really care, but he should get help”. Classiest guy in show business, Tom Selleck, who happens to play Len Cariou’s son in Bluebloods. And so we come back to where we started. I wonder if Tom’s picked up any good curtain call tips from Len?