The Middle-Aged Guide to Growing Up: Hot Wheels For Christmas - CARP
Join Donate Sign In 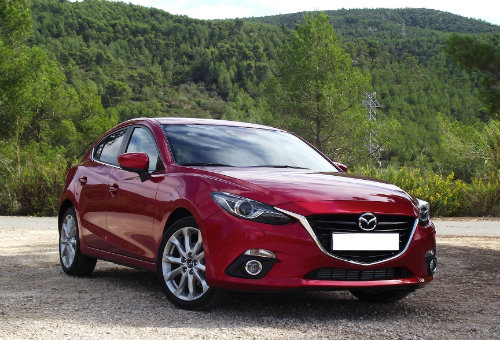 I go through cars the way most people go through gym shoes; another one every year, usually around Christmas. Last year, I wrapped my car around a lamppost and rolled it, and drove it home. The year before that, I rear-ended a cement truck and lost. That one was totaled too.

Just last week, I lost my latest Black Mazda 3 (they’re all black Mazda 3s, we’ll get into that later) during an unusually high wind at the beginning of December. Trees were bending over to kiss the ground, and it was too much for the old maple on our lawn, already ravaged by the ice storm of 2013. A large branch, about a foot and a half thick (it’s a big tree) splintered off the main trunk and fell on the street. My wife was reading in bed and watched it fall, slowly at first and then with a thundering crash which she heard over the wind, followed by an ominous crunch and tinkle.

She came into my study and said “a branch is down, I think you’d better come look”. I went into the bedroom and looked out on the street. Sure enough, the branch was lying, shattered, in the middle of the street, blocking it for about thirty feet. I was marveling at all this when my wife said “I think it got your car”. I hadn’t even thought of that, the branch wasn’t lying over the car. I looked closer from the window. OK, the front fender was dented. And the side panel, both doors. And the front hood.

When I got downstairs, I realized how extensive the damage was. The rear window was smashed as well. Clearly the branch had come down right on top of the car, heavy end first, and bounced off. The side mirror was torn off, and the rear mirror couldn’t see through the shattered rear window. The doors on the driver’s side wouldn’t open because of the dents.  This was my third Mazda in 3 years.

I single-handedly wrestled a sheet of garbage bags over the rear window, using packing tape in the 100 kilometre an hour winds. Now I know what it was like reefing a square rigger, perched on a rope  30 feet above the deck in a storm. The rear window secured, I felt I could leave it at least until the morning. I inspected it. There were lots of smaller scratches from branches, as well as the major dents already mentioned. It looks like I’m on my 4th car in 4 years.

I reported the claim the next morning and discovered, just like the last time, lots of people were in the same pickle I was. The claims adjuster said she had 14 cars flattened by fallen trees on file at that moment, and I was the 15th. I was going to be a walker for a while.

I don’t take the subway. I don’t. I walk, take a cab or drive, and I started taking cabs. $120 into just noodling around town, I decided I’d save money renting a car. Budget downtown (the ONLY rental car place in the downtown, oddly enough) got me into a nice VW Passat. It had a back up camera that was impossible not to watch, and a sport driving mode that made it go like my car (almost).

I kept the car for 8 days and only drove it about 4 or 5 times, mostly up the block to get groceries. When I turned it in, my ding was $850 and I don’t have a rental car rider on my insurance. It DID get me to two important appointments that would have been next to impossible on the subway. I can’t understand how people who have real jobs in this city don’t have cars? What about the client up in Vaughan or the data centre in KW?

I dropped into the body shop where the car had been towed to pick up my belongings from the trunk and the plates. I had only taken the insurance and ownership with me before it was towed. All my stuff was still in the trunk (safety cones, fluorescent safety vests, hard hats, flares, etc) but the plates were gone. The owner insisted they had been there the night before. This was a major hassle because I had to license a new car instead of just changing the ownership. The owner of the shop promised me he would reimburse me for the cost of licensing.

The claims adjuster, whom I had been harassing because my estimate was so long coming, finally came through with the offer. It included $700 for new tires I had bought the week before the car was smashed. And she waived the $300 deductible. Somehow, by some illogic of the universe, the amount she offered me was more than I had paid for the car a year before. I said, “yes, that will be fine”.

Youngest brother took me car shopping. For those who read last year’s entry about buying Mazda 3s at the Place Where They Sell Nothing But Used Mazda 3s, it’s quick and easy. He showed me a red one; it wasn’t a GT (2.3 litre engine, leather seats, alloy wheels), he showed me a black GT; it was too expensive. I dialed my bottom line year back from 2007 to 2005, the same year my car had been.

He had a nice grey GT, cherry, with just over 100,000 km on it. The leather was crisp, the interior clean and there was no rust. The tires were brand new. This was the same year as my last car, less mileage, better shape and cheaper than the one it was replacing. This seemed counter to the laws of physics, but I said nothing and signed the ownership.” Pick it up Friday?”  It took less than 20 minutes. This was my Christmas present to myself, and I was damn sure it was going to last past next Christmas. None of the last 3 have, but this time I’m getting lucky, I know it.