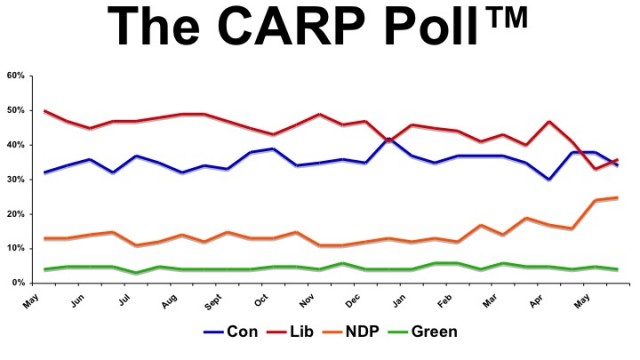 While members see problems with First Past The Post (FPTP) and like Alternate Vote (AV) and Proportional Representation (PR) electoral systems, and they find favour with the consensual negotiating implied in a minority or coalition government, they still believe the majority of voters should elect the government.

The majority of CARP members agree Canada’s electoral system needs reform, and more prefer a coalition to a majority under the First Past The Post system (FPTP). Despite this, it is important to a third that the government receives a majority of votes.

When rating other electoral systems, both the Alternate Vote (AV) and Proportional Representation (PR) are liked by half or more, and members are relatively equally likely to think the majorities guaranteed by AV and the representation guaranteed by PR are important. When the three main electoral systems are compared directly, both PR and FPTP are well liked, while AV falls behind.

Two thirds favour the NDP victory in Alberta and more than half approve of the majority, with just over 40% of the vote.

The vast majority of members approve of MP Michael Chong’s Reform Bill, the plurality agree caucus should hold more power in the party than the leader and that the Senate should pass the bill now, rather than delaying it further. Three quarters want to see the original provisions contained in the bill.

Two thirds of members want to reform the senate while one quarter wants to see it abolished. Very few want it left as it is. Members’ opinions of senatorial ethics is very poor.