Carol's Corner: Once We Were Campers - CARP
Join Donate Sign In 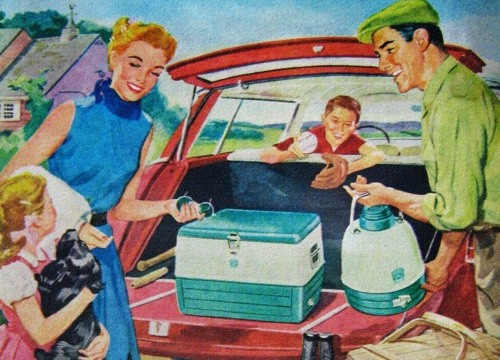 ONCE WE WERE CAMPERS. Not sloshing through the swamp, portaging past the rapids, or beating our way through the bush type of campers. We were just a young couple with three kids, henceforth identified as One, Two and Three, in order of appearance, whose friends, Jack and Sylvia – always at least one step ahead of us – were camping experts, at least by our standards, our standards being total ignorance.

“The kids will love it,” they assured us. “You can be right on a beautiful beach, surrounded by swaying evergreens, chirping birds, peace and calm for two to three dollars a night.” What could be better? Well, perhaps indoor plumbing and electric hook-ups would be better, but in those days our sense of adventure was greater than our demand for these amenities. In short, we bit. This was the 1960s. While some hark back to the wild days of the Woodstock Festival, at White Lake, New York, we recall a much more bucolic experience in our neck of the New York woods. Incidentally, campsites now cost on the vicinity of $20 – $30, depending on the amenities, actually just following the increase in the cost-of-living. In other words, still a good deal.

Jack accompanied us to the sports equipment store to purchase Coleman stove, lantern, sleeping bags, air mattresses, pump for said mattress, flashlights, and told us they would be happy to lend us their old tent, having recently purchased a larger one. We accepted their kind offer, as well as their advice to choose Fish Creek Pond – in the Saranac Lake area of New York State – a mere two-and-a-half hours from Montreal, where we were living.

We decided that we would attempt a “dry run” on a week-end early in July, before we embarked on a whole week’s trip, scheduled for later in the month. Taking our friends’ advice, we made check lists for kids and ourselves, plus one for “stuff” and another for sufficient food to sustain us for the next 36 hours, and matches, lots of them. We packed our clothes into matched beer cartons – the ultimate in camping elegance – loaded the cooler and off we went. In those days you could cross the border with fresh vegetables and fruit, just not oranges.

Fish Creek turned out to be just as lovely as advertised. The air was fresh – if a trifle on the cool side – and we set to work erecting the tent, all 48 square feet of it. The general shape was six by six, with a sort of poop deck in the back measuring another couple of feet, where the height of the tent dipped to about 36 inches. In other words, once you put five air mattresses and sleeping bags down there was no unoccupied floor space. There was a centre pole. This required the tallest person to get under the canvas, poke the top of the pole through the hole in the tent, and stagger upright while the rest of us got in each other’s way, trying to lift the outside edges of the tent. Then we drove stakes into the ground, attached the ropes, and – voila – our “home away from home”.   ONE made herself useful handing tools to Dad and Mum; TWO was commanded to keep an eye on THREE, and both of them were tasked with hunting for kindling. This kept them out of the way, and besides, what’s camping without a campfire? And a campfire needs kindling.

We ate, we swam, and made frequent dashes from the lake to said campfire just prior to turning blue, explored the neighbourhood and decided that on our return we would be even more adventurous and camp at the woodsier Rollins Pond, just a few minutes down the road. TWO was our bathroom scrutineer, and after examination announced that the outdoor biffies passed inspection, the lake was even clearer, if that were possible, and there was even a water tap to share between neighbouring campsites.

During the day there was lots of sun, with the temperature hovering around the low to mid-twenties (celcius). By 9:30 were all ready to pack it in. Packed was the right word, which was just as well, as we had forgotten that at night, in the Adirondacks, the temperature drops to about 10 or 12. Covered in whatever extra clothing we could find, we all huddled into our sleeping bags, and finally fell asleep.

In the morning it was cloudy. We packed and left; if we hadn’t invested $300 in our equipment we might have called off our attempt to become campers. Instead, we forged ahead. For our week stay we packed every blanket in the house, my grandmother’s old “comforter”, ski underwear, ski socks, mittens, toques, turtle-neck sweaters and hooded sweatshirts. We survived. We even enjoyed the experience. The next year we bought our own tent: a luxury number, 18 feet long, by 8 feet across, canvas, outside frame, with three rooms: one for the kids, one for us and the one between was our storage/games room/wrestling pad.

Things we learned while camping with an 18-foot canvas tent.

Now that’s my kind of housekeeping.