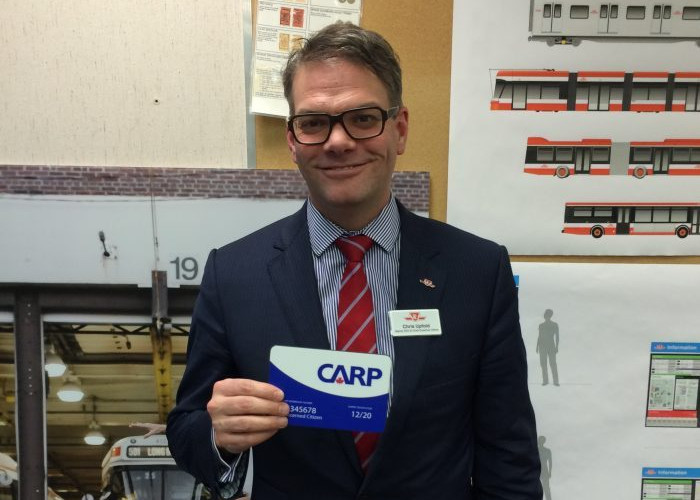 February 2017 – There have been many headlines in the news recently looking at the future of public transit in increasingly congested cities across Canada.

The CARP Chapter in London, ON took the LTC to task with their plans to remove seniors fares in that city. Despite the objection from CARP members in that community, the City Council opted to remove senior-specific fares starting in 2018 and to replace them with an increased discount for low-income riders, many of whom will be seniors.

In Toronto, Councillors have brought up the possibility of removing discounted seniors fares, while at the same time, Mayor John Tory has said that seniors fares aren’t going anywhere. That could all change as Mayor Tory’s plans for highway tolls were recently shot down by Ontario Premier, Kathleen Wynne. The Mayor says that without those funds, he has a large hole in his transit and infrastructure budget and hasn’t yet indicated where else the needed cash could come from.

In recent years, the TTC has done away with fares for children 12 and under, while increasing the single-fare price for other riders several times. The TTC has also moved away from printing bus schedules at individual stops, focusing on telephone service, mobile apps and electronic display signs to ensure that riders know when the next bus is coming. The removal of printed schedules at stops had some in the community upset, claiming that seniors would be the most likely to be affected.

CARP Action
CARP requested a meeting with TTC brass to hear directly from the Commission where they see Senior’s fares going in the future and how they are planning to service a greying population. TTC Deputy CEO and Chief Customer Officer Chris Upfolds welcomed Wanda Morris and myself into his office at TTC headquarters on Yonge St, high about the Davisville subway station.

Upfold explained that his team provides a plan of service for the Board of the TTC and a budget for what the service will cost. Based on that budget, the Board sets the passenger fares and decides what groups, if any, are entitled to a discount. Toronto currently offers free fares for children, discounted fares for pass holders and subsidies for low income residents of Toronto. However, none of those programs are implemented by the executive of the Transit operations. They are solely responsible for the mechanics and delivery of the transit system, while the Board of Directors, under Chair Josh Colle, recommends how much to charge riders and reports to city council on their estimate of the perennial shortfall between the funds collected at the fare box and the operating costs. The rest of the money comes from the city’s general revenues (taxes) and grants from the provincial government (taxes).

Of concern to Upfold is the costs associated with the serivices’ WheelTrans program for the disabled. The costs per ride cost the taxpayer approximately $30. With the increasing number of riders qualifying for this program, the TTC will have another, growing, underfunded service that the City and Province will have to support from the tax base.

What’s next?
The next stop for CARP on the transit file in Toronto is to hear from TTC Board Chair Josh Colle on the future of transit fares in Toronto on how to ensure that the system is prepared for a growing, aging ridership – one that will need accessible and affordable transit.