The Ontario Budget: What’s in it for Older Ontarians? - CARP
Join Donate Sign In 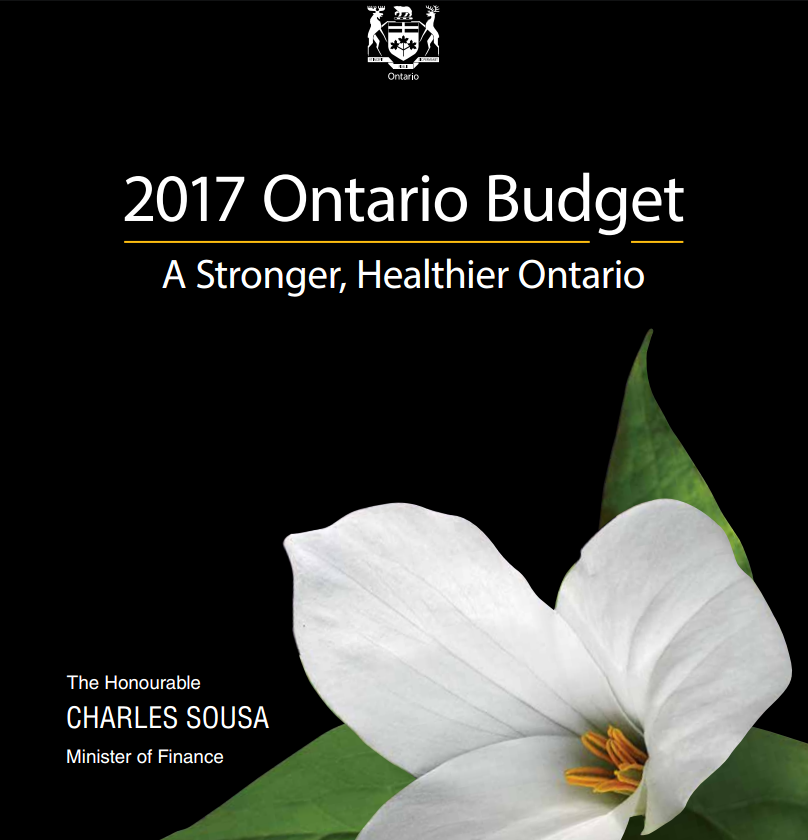 Join CARP to help us become the biggest advocacy group for seniors.

And become a member.

We have great benefits and membership gets you amazing deals and savings for travel, insurance and much more.

Toronto, April 27, 2017 – The Ontario Liberal Government released its 2017 budget today. CARP was there to find out how it will address critical issues facing older Ontarians. Here’s what was tabled:

Caregiver Support
The Ontario government will provide additional funding of $20 million in 2017 for approximately 1.2 million hours of respite services for caregivers. This funding will be used for personal support services or nursing support at home, allowing caregivers to schedule breaks from the crucial work of caring for a loved one.

“Caregivers endure significant costs to their own health, including high levels of stress and burn-out as a result of the challenges associated with caring for a loved one,” said Wanda Morris, VP of Advocacy for CARP, who has been advocating for more caregiver respite support, among other financial supports.

“CARP is pleased to see the Ontario government has responded to our campaign asks with necessary supports and additional investment.”

The government also announced investments in education and training programs for unpaid caregivers to help them better provide care to their loved ones at home.

“Financial relief to caregivers is critically important. We know that informal unpaid caregivers save Healthcare Systems across Canada $26 billion annually, so it’s good to see some of those savings being used to alleviate caregiver stress.” said Morris.

What’s not in it for caregivers?
“While we laud these positive steps, we’re concerned that the government has not provided relief to caregivers who have the greatest financial need. If you’ve given up your job to be a caregiver, you won’t benefit from a credit against your taxes,” said Morris. “CARP is advocating for a ‘refundable’ caregiver tax credit or a means-tested caregiver allowance.”

Funding for a dementia-strategy
The Ontario government will invest $100 million over three years to support people with dementia and those who care for them.
This will include funding to expand access to community programs and other investments to enhance access to care, information and support. The funding will also serve to improve training and education in dementia care for personal support workers, physicians, nurses and other front line workers.

There are approximately 200,000 people in Ontario living with dementia; this number is expected to double in 20 years.

Earlier this year, CARP partnered with the Alzheimer’s Society of Ontario to engage thousands of Ontarians in support of a fully-funded dementia strategy.

“Sadly, people living with dementia have been suffering greatly due to inadequate care and neglect,” said Morris. “Even worse, some dementia sufferers in long-term-care homes have experienced aggression from other residents, including violence leading to death. A funded dementia plan is a first step to putting resources in place to keep residents safe,” said Morris.

In a recent poll, CARP members were clear that they wanted action on dementia-related issues, with over 70% indicating that they were “a lot” or “extremely” concerned.

Investor Protection
CARP, who has been advocating strongly for investor protection, is pleased that the government intends to propose legislative changes that would improve enforcement of investment industry regulatory organizations. These changes will now give the Investment Industry Regulatory Organization of Canada (IIROC) and the Mutual Fund Dealers Association of Canada (MFDA) legal authority to pursue the collection of disciplinary fines directly through the courts.

This means that wrongdoers in Ontario will no longer be able to avoid payment simply by leaving the securities industry and abandoning their registration with IIROC.

“For investors who want to protect their hard-earned life savings, this sends an important signal that those who have abused their trust will pay for their wrongdoing,” said CARP’s VP Advocacy Wanda Morris.

According to a CARP survey in February, 86% strongly support (61%) and support (25%) granting authority to IIROC to legally pursue investment advisors who do not pay their fines.

Regulation of Titles
CARP is pleased that the government will take steps to curb consumer confusion by working with regulators to restrict the use of titles related to financial planning. CARP has been calling on regulators to develop a short list of approved titles that describe clearly the regulated activities that the holder is qualified to provide. In addition, CARP asks for the prohibition of titles that are not approved and regulated, which can be misleading and often simply contribute to confusion among investors.

“The challenges already posed by some investors’ limited financial literacy are only compounded by the confusing array of titles used by financial advisors,” said Morris. “We are pleased that the government is taking this concern seriously.”

More needs to be done
Morris notes, “While this is an important first step, more needs to be done. The government needs to stop existing practices which, while currently legal, result in unnecessary risks and ill-informed decision making by investors. There must also be improved restitution for investors who have suffered financial losses as a result of advisor wrongdoing.”

It would provide a refundable benefit of 15 per cent of eligible public transit costs, providing an average annual benefit of $130.

“This tax credit is especially critical to seniors who are no longer able to drive,” says CARP. “Increasing affordability and accessibility of transit ensures that those aged 65 and older don’t become isolated and lonely.”

Long-Term Care
CARP is also pleased to see additional funding of $58 million in 2017 for resident care. Funding will go toward improving access to training and supports for palliative and end-of-life care. The government is also strongly encouraging long-term care providers to re-develop more than 30,000 beds.
The government has announced additional funding of $15 million for the food allowance to ensure homes provide more nutritious menus.

CARP is extremely concerned about resident or resident aggression in Long Term Care facilities, and hopes that this funding will prevent recurrences.

Join CARP to help us become the biggest advocacy group for seniors.

And become a member.

We have great benefits and membership gets you amazing deals and savings for travel, insurance and much more.