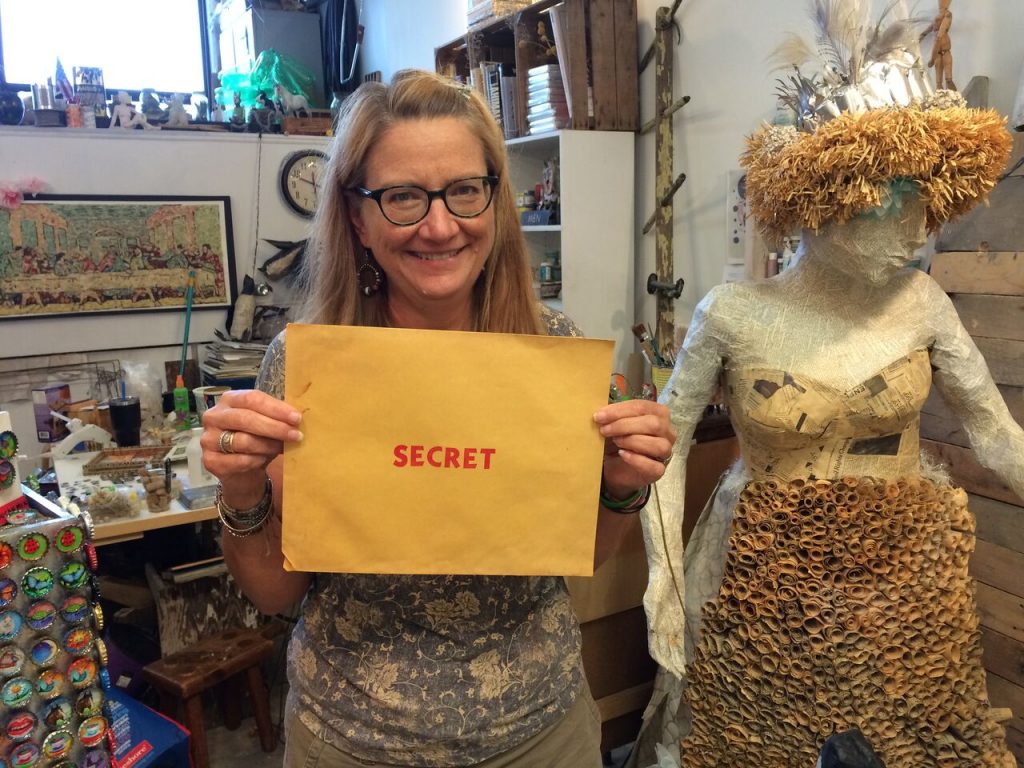 There’s no question that Alexandra, Virginia is one of the loveliest cities in America. Southern Living magazine named it one of the South’s Prettiest Cities in 2018, and it was one of the Best Small Cities according to the 2018 Condé Nast Traveler Readers’ Choice Awards.

Beyond the historical beauty, it’s a thriving city that supports its innovators. Be sure to enjoy Alexandria’s beautiful old buildings and streets, but don’t miss the people who are turning the city into an exciting 21st century destination.

The Torpedo Factory Art Center was once a munitions plant – hence the name Torpedo Factory, and the sample torpedo (painted green, so the Navy could find it underwater during testing) displayed on the main floor.

After the end of World War II, the factory was a storage facility for the federal government, but it became increasingly rundown until the city of Alexandria bought it in the 1960s. Following a refurbishment in the 1980s, it now houses 165 working artists in 82 studios, and has seven galleries. And it’s free to the public.

As I walked through, I met artist Matthew Johnston, who was working in his gallery. Johnson has been in the building for 40 years.

“When I graduated, I asked one of my profs for his best advice,” Johnston said. “He told me to find a place I loved and stay there.” He moved to Alexandria in 1978 and took a job that wasn’t related to his art degree. “I saw a news report on the Torpedo Factory Art Center. An artist could rent space, sell his paintings, and pay no commission. That was perfect for me. I took the next day off work, and was juried in. I never left.”

He talked about how the art community has changed over 40 years. “I think the original Art Center was more bohemian,” he said. “The artists were young and excited about the whole project. After the building renovation in 1983, a lot of excellent artists left, preferring not to working in such a regulated environment. The new Art Center had many rules, but the new building increased visitation and sales. So it became a place in which one could actually make a living.” And what hasn’t changed? “The response from the public. They love the Torpedo Factory as part of the city.” 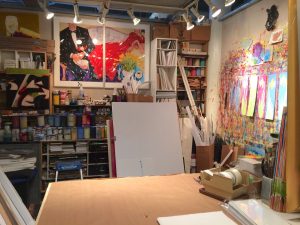 I also met artist Lisa Schumaier, who uses recycled goods to create her art. She grew up in Alexandria, and knew the Torpedo Factory well. “When I was a ‘skateboard kid,’ I used to sneak into the factory while it was still abandoned. One day I came across some government envelopes in the building that were marked ‘Secret’ on the outside. I was disappointed when I discovered they were empty.” She still has the envelopes.

But the Torpedo Center became much more important to her as an art community. “I saved my allowance, and bought my first work of art here when I was about fourteen,” Schumaier said. “The artist took me seriously, and I’ve never forgotten it. I’m honoured today when young collectors buy a work of art from me.” She creates and sells painted bottle caps, so everyone can afford to buy something from her.

I asked what inspires her art, and she said, “I’m inspired by creativity, and my love of handmade things.” And she loves being surrounded by the creativity of other artists in the Torpedo Center. She showed me her collection of homemade mugs: “It’s like having coffee every morning with my friends,” she said, pointing out a thumbprint in one of the mug handles. “Why would you buy something at Walmart, when you could have coffee with one of your friends?”

The boutique scene is thriving in Alexandria.

I visited Threadleaf, a new clothing boutique that opened in 2018. Owner Nicole McGrew was an attorney for twelve years, including a stint at the White House with the Obama administration. After the 2016 election, she considered what she’d do next.

“I originally graduated from design school, before shifting gears into law school,” McGrew said, explaining her change of career. “Even though my contacts didn’t carry over, my status as a lawyer opened a few doors with vendors. And it helped with the legal work and planning involved, as well as the lease and my contracts.”

McGrew is interested in sustainability, and her selection reflects that. She researches how products are made (both in terms of labour conditions and natural fibres) before putting them in the store. “They also have to be wearable, and easy to take care of,” she adds. Threadleaf’s tagline, ‘Good. Clean. Fashion.’ says it all.

McGrew lives in Alexandria. “It’s a real community,” she says. “I love living and working here.”

If you like vintage barware, you’ll love The Hour boutique. Owner Victoria Vergason started collecting vintage glassware and barware when she was in grad school. “I shopped flea markets and antique malls as I could afford these beauties, and I loved their uniqueness,” she said. After collecting for fifteen years, she opened her boutique, and now she travels around the country and the world to buy pieces for the store. Her latest endeavour is designing a line of barware, including a penguin-shaped jigger inspired by one produced by Napier in the 1920s.

I asked Vergason about her favourite pieces in the store. “Every home bar should include a gorgeous cocktail pitcher,” she said. “One of my favourites is the Gorham silver plate pitcher. I love the sexy curve on the handle of this mid-century piece.” Other pieces she loves are a set of Guitar old-fashioned glasses and a vintage Bel Prata cocktail shaker.

You’ll do a lot of walking as you explore Old Town Alexandria. There’s no better way to replenish your energy than to stop for a gelato pick-me-up. Dolci Gelati offers authentic Italian recipes with flavours that change seasonally, including Pumpkin Pie, Peanut Butter Cup, and Saffron Pistachio with Candied Lemon Peel, which won a prize for best in America in 2016.

I tried the Honey Mascarpone and Fig gelato, which won best in America in 2017. I asked chef and founder Gianluigi Dellaccio how he created that flavour. “I was inspired by cheese carts that you see in fine dining restaurants,” Dellaccio said. “I used to work as a pastry chef and there I created marmalades that went well with cheese. I made fig marmalade and I always used local honey for it. Mascarpone cheese is the creamiest cheese we have in Italy. I combined the three ingredients to create the flavour.”

The Condé Nast readers who chose Alexandria as one of the best small cities are definitely onto something. After walking through this lovely town and meeting some of the inspiring people who live and work there, it’s near the top of my list for places I’d like to visit again.

Notes: The author was a guest of Visit Alexandria, who did not review or approve this story.

Indigo Hotel: Indigo is Alexandria’s first hotel built right on the waterfront, and it’s a short walk to everything in the Old Town. This quiet boutique hotel offers comfortable guest rooms with views of the city or the Potomac River. Don’t miss breakfast at Hummingbird Café on the main floor: the Virginia Ham and Gruyere Omelet was a delicious and filling way to start my day. 220 S. Union St.

Virtue Feed and Grain: This restaurant is named for the former feed house set in the building in the 19th century. But some of its history is more recent: look closely and you’ll see the high-water stains left by 2003’s Hurricane Isabel.  I ordered the chipotle-roasted sweet potato tacos; they were stacked with goat cheese, pickled onions and pickled jalapenos, and went beautifully with the side of rice & beans. 106 S. Union St.

Mia’s Italian Kitchen: Inspired by simple Italian family food, Mia’s delivers with delicious house-made pasta and other specialties served in a cozy restaurant. The building was constructed in 1871, and originally held a grocery store on the first floor and the local Corn Exchange on the second. 100 King St.