What Are The Polls Saying In The Provinces? - CARP
Join Donate Sign In 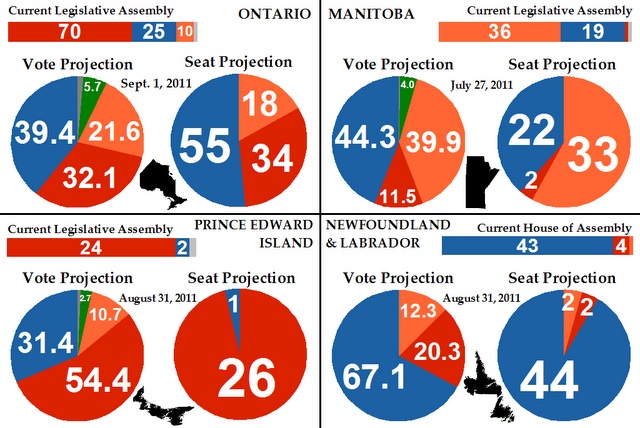 There are five provincial elections coming up in the fall. Here is what the polls are saying:

The Progressive Conservatives under Tim Hudak have led the polls for a year, but are losing their lead just as the campaign starts. Latest polls have the PCs ahead of the governing Liberals by a merest fraction. The NDP, despite a surge of sympathy after the death of Jack Layton, are firmly in third place.

Seat projections now call for a Hudak minority government, which would almost certainly be brought down by a Liberal/NDP opposition pact, leading to a coalition government

Premier Greg Selinger’s NDP look as though they will win another majority, despite trailing the Conservatives in the polls.

Premier Robert Ghiz’ Liberals are an unstoppable force, dominate the polls and may sweep the legislature in the election.

Premier Kathy Dunderdale’s PCs are also an unstoppable force and they will win a dominating majority in the election.

* Thanks to Eric Grénier at threehundredeight.com for the graphic