That’s a wrap everyone! Tales from the annual CARP gathering - CARP
Join Donate Sign In 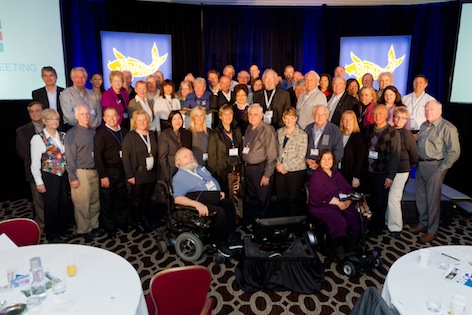 Ross Mayot has dubbed it our annual “gathering of the clans”. Every year in late October, Chapter Chairs and members descend on Toronto for the CARP Zoomerlife Conference, Annual General Meeting (AGM) and stay on for the Zoomershow. It’s always a great opportunity exchange experiences and best practices but this year, it can truly be said that an entirely new benchmark was set.  The gathering was re-energizing, instructive, productive and inspirational gathering.  Spirits were high and ideas freely exchanged.

That very well may be because it has been an incredible year for CARP National and for the Chapters.  For starters, our Network of Chapters is larger, more active and more influential than ever. The number of Chapters has quadrupled in the last three years. We now have 50. They play a vital role in CARP’s mission—as our ears, eyes and voices in communities from coast-to-coast, as we advance the right for people to remain active and continue to have a strong voice—individually and collectively—as we age.

CARP National had a seamlessly symbiotic relationship with the Chapters this year; we assisted them in their activities and they returned the favour in kind by being pillars of support for the CARP objectives.  The annual general meeting is really an occasion and an opportunity for us to come together as a very large community of interest, knowledge and resources and take stock of what we’ve achieved but chiefly – to be inspired.

It places an emphasis on the community aspect of our work – we don’t come together because we share the same shade of grey or a certain date of birth – we do it because we share in each other’s excitement, ingenuity, imagination and promise. The annual gathering reminds us that that we are also more than just a group of older people who want to stand up and be counted because we have a vote; we are a community of whose shared vision unites us.
To learn more about the CARP Chapters and how they work with the National Office to Advance advocacy initiatives, please click here

After Susan Eng Chaired the formal business portion of the AGM, the Community Development session began.  This year, instead of hearing from Ross Mayot, we heard great presentations by Chapter Chairs who shared their experiences and ideas about how other Chairs can attract community leaders to their Boards; land local sponsors and partners to support Chapter activities; represent CARP’s Advocacy issues at the local and provincial level; engage in community outreach to promote a positive Chapter profile; and form partnerships with educational institutions to create lifelong learning opportunities for members.

“Their enthusiasm, passion and energy communicated a “can do” attitude that inspired everyone in the room.” Said Ross Mayot.

CARP Chair Dawn Edgley discussed her passion for bringing people together to help seniors who need help in her own community as well as other organizations struggling to raise funds for their initiatives. She and her Chapter organized a very successful “Cup of Tea” event as a Fundraiser for the ONPEA (Ontario Network for the Prevention of Elder Abuse) Senior Safety Line.  She spoke of her desire to raise more awareness for this important issue.  In fact, the Brockville and Thousand Islands has decided to make Age-Friendly Community, Accessibility and Elder Abuse its main social causes for the coming year.

Denise Kelly spoke of the need for team spirit because ageing is a journey that we all eventually take.  CARP, she said, has the potential to bridge the gap between the generations from people who are 45 right up to those who are 105.  She also stressed the need to educate people about ageism, the ageing process and about the negative impact of isolation “we need to educate them and break down the barriers they may have… Education is just as important as advocacy”.  Dawn’s North Shore Chapter joined forces with the White Rock-South Surrey Chapter to represent CARP at the Capilano University Elder College Conference in support of CARP’s lifelong learning objectives and our “CARP CAMPUS” initiative.

Vancouver area chapters also collaborated on a booth at the BC Active Aging Symposium and Word on the Street. Denise Kelly, Chair of the North Shore Vancouver Chapter stepped up to organize the CARP booth at the symposium. Earlier in the year, Denise and Jennifer Abbott (North Shore Vancouver Chapter) participated in the “Aging Revolution” event held at the Park Royal Mall, Denise also recently gave a presentation at another North Vancouver venue; the Churchill House.
Paul Reisman who is the Chair of CARP’s very first Montreal Chapter also spoke excitedly about finally having representation for the older-set in Quebec.  “There was no opportunity to get together as a community of people with common interests and common needs,” he said.  He added that many people in his community were interested in doing something of a philanthropic nature. In particular, Riesman marveled at the fact that so many people who encounter adversities such as caretaking or raising a grandchild are willing to help others in similar situations.

The Montreal Chapter’s very first meeting was a raging success.  Mr. Reisman reports having promoted the meeting on the radio but had not expected that they would have to turn people away. After he received more RSVPs than the venue could accommodate he had to take names and addresses and promise to invite them to the following meeting.  Lac Saint Louis MP Francis Scarpaleggia as well as several West Island mayors attended the very first Chapter meeting.  This speaks to the power of CARP’s constituency and to Paul’s ability to engage community leaders in the Chapter’s activities.

Toronto Chair Adina Lebo said her Chapter has been placing Zoomer magazines and CARP brochures in Golf Course Pro Shops and at B&B’s in their area. The Toronto Chapter launched earlier this year in the Isabel Bader Theatre to a jam-packed room.  She and seven other GTA Chapters continue to have “super meetings”, Adina is a former Director of the Motion Picture Theatre Associations of Canada.  She is interested in organization cultural activities.  “Our generation is going to make sure we age in a very participatory way.  We’re not our grandparent’s generation, we’re Zoomers!  This is new ground… This is Star Trek!” she confided.

Edmonton Chapter Chair Bernice Rempel spoke of the diversity of activities a Chapter can undertake under the CARP banner.  Her Chapter, she said was very focused the advocacy but she stressed that there were different types of experiences that could be had as well. The Chapter offered a ton of opportunity for social interaction as well as continued learning.  Although her Chapter is serious about advocacy, they also participate in other initiatives for the sake of fun (and science).  For example: the Edmonton chapter took part in an Athabasca University research project on the use of E-readers (i.e. Kindle, Kobo) by older adults. Each participant was asked to make use of the E-reader for 6 weeks and report back on their experiences. Athabasca University is analyzing the results of the study and we will report on the overall findings at a later date.

Town Hall with the Federal Minister of State for Seniors

In the afternoon, Susan arranged for Alice Wong, the Federal Minister of State Responsible for Seniors, to host a Town Hall session and answer questions.   Minister Wong had already had the pleasure of meeting many of the Chairs in attendance earlier this year.  She expressed admiration for CARP and underscored that she was there to listen.

She talked about the initiatives her Government has taken to ensure seniors’ financial security:

“This year alone, Canadians will receive an estimated $72 billion through CPP, OAS and GIS.  But our efforts don’t stop here.  In our last our last speech from the throne we pledged that the Government’s low-tax plan would permanently enhance benefits for Canada’s most vulnerable seniors.  We honored that pledge by providing the largest GIS increase in a quarter century to Canada’s lowest income seniors to help them make ends meet.  We also had already increased the GIS exemption from $500 to $3500…  This year we are providing more tax relief for seniors and retirees that will save them $2.3 billion. The government also acknowledges the role of informal caregivers in the continuum of care.  We currently support caregivers through a range of measures we have introduced 15% non-refundable tax credit of $2000.  The list of eligible caregiver will include (for the first time) spouses, common law partners and minor children.”

Minister Wong fielded questions from the audience committing to discuss the possibility of a National Home Care plan with the health Minister as well as re-stating her Government’s commitment to honour their Throne Speech promise to introduce tougher sentences for those who abuse seniors.  CARP was able to secure a commitment that the legislation was still forthcoming.

Minister Wong’s presence at the CARP AGM and her willingness to go off script for our audience is indicative of the clout and credibility CARP has earned over the past several years.  It reinforces our crucial role in the debate over all issues of concern to this powerful and politically engaged constituency.

To see a video of the Minister’s Town Hall, please click here
After the Minister’s appearance, Eric Vengroff, VP of Benefits outlined some of the new member benefits and Susanne Boyd, Editor-In-Chief of award-winning Zoomer magazine provided a very interesting session outlining the continued expansion of Zoomer Magazine’s and CARP pages’ reach.
The Chapters Chairs said they thoroughly enjoyed afternoon presentations by Randy Filinski of the Ajax-Pickering Chapter and Bill VanGorder of CARP Nova Scotia and the CARP Advisory Board.  Randy is a former IBM executive and he explained how he used his marketing and communications experience to develop the Chapter’s revenue base and reach.   What he has been able to achieve is remarkable.  Even though the Chapter only launched recently, Randy has been able to make use of the advertising space in the newsletter and the launch event to secure a long list of local and national sponsors and affinity partners.

Bill VanGorder provided a seminar to help the other Chapters benefit from his charitable and volunteer boards creation savvy. Bill has recently been elected Chair of the Group of IX Seniors Advisory Council, the official advisory group on senior’s issues to the Government of Nova Scotia.

The group has had significant input into such seniors-related government programs as seniors’ Pharmacare, Fair Drug Pricing and the Continuing Care Strategy. Being part of the Group of IX not only gives the Chapter, through Bill, direct access to the government of Nova Scotia on these issues, including a role in passing of the Fair Drug Pricing Act in Nova Scotia, and as a result is frequently contacted by the local and regional media for comment.

Hopefully this report has made CARP members that are not yet active with their local Chapter want to get in touch!  Community is one of CARP’s greatest benefits.  Don’t be shy to visit the community page, find your local Chapter and tell them you want to get involved!  Visit the Chapter site by clicking here.