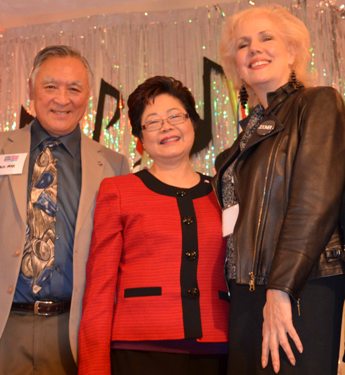 The Minister of State for Seniors, the Honourable Alice Wong gave a congenial speech to a group of approximately 100 CARP members at the Elks Hall in White Rock Friday evening.  As the guest of Jack Mar and the White Rock/Surrey Chapter of CARP – A New Vision of Aging for Canada, the Minister presented an overview of what her government is doing for seniors specifically in the area of elder abuse.

Elder abuse, as defined by the Government of Canada is, “Any action by someone in a relationship of trust that results in harm or distress to an older person.”  This can take the forms of psychological, financial or physical abuse as seniors are recognized as vulnerable in these areas.  Minister Wong addressed the scope and seriousness of elder abuse in Canada and how she is working closely with CARP’s VP of Advocacy, Susan Eng to address CARP’s six point action plan on elder abuse presented to her earlier this year. (see www.carp.ca)   Two proposed CARP actions include mandatory duty-to-report as well as an Elder Abuse Hotline. The Minister hinted a significant announcement is forthcoming.

Minister Wong outlined a new federal grant called New Horizons for Seniors Program which “…supports projects led or inspired by seniors who want to make a difference in the lives of others and in their communities,” as stated on the Government of Canada website.  She added that 10 million dollars is budgeted this year for elder programs.  Education is the key to preventing elder abuse, according to Wong.  An example of this are the national ads on elder abuse she says have been successful in creating awareness on the issue.

Minister Wong then shared the stage with local MP Russ Hiebert and during the question and answer period she quipped about her height next to Hiebert stating, “He looks like an elephant and I look like a mouse!”  However, referring to her concern on the subject of elder abuse,she added, “…but I stand tall…I stand tall for you.”

Outgoing White Rock Mayor Catherine Ferguson then shared a few words followed by Mayor-elect Wayne Baldwin. According to the last census, White Rock is a city where 27.8% of its citizens are seniors.  That’s twice the national demographic at 13.7% and almost double the senior demographic of BC at 14.6%.  Baldwin voiced his hope that White Rock “be a model for the rest of Canada,” when referring to the need to create more awareness for elder abuse in White Rock.

Colleen Kerr, Crime Reduction Strategy Manager for the City of Surrey spoke about Surrey’s locally run forums called Focus on Seniors.  The forums are aimed to educate seniors and caregivers for the purpose of creating awareness of the resources available in Surrey. For more information on CARP’s advocacy work on seniors’ issues, please go to www.carp.ca.