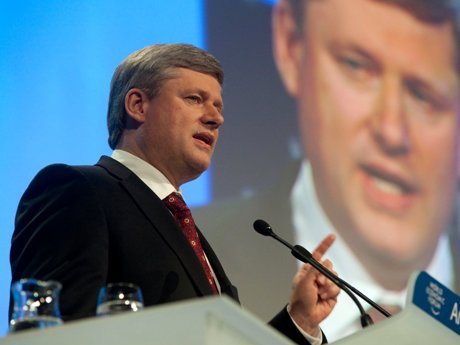 This article was originally published in the Globe and Mail on January 26th 2012.  To view the original article as well as related articles on the globe and mail website, please click here.

After five years of minority governments, Stephen Harper finally has the freedom to act.

He’s no longer looking at the limited horizon of the next budget or the next election. He’s planning on transforming Canada for a generation or more. This is Stephen Harper’s blueprint for reform.

Although short on details, Mr. Harper’s speech to the World Economic Forum in Davos, Switzerland, on Thursday made clear the sweep of his ambition. He will change how Canadians finance their retirement. He will overhaul the immigration system. He will make oil and gas exports to Asia a “national priority” and aggressively pursue free trade in India and Europe.

Several times in his speech, Mr. Harper portrayed his agenda as a fix for a generation – a fix he claimed is necessary to confront the challenges of an aging population. Canada’s demographics, he warned, pose “a threat to the social programs and services that Canadians cherish.” Preserving those social programs will likely mean cuts elsewhere.

“Western nations, in particular, face a choice of whether to create the conditions for growth and prosperity, or to risk long-term economic decline. In every decision, or failure to decide, we are choosing our future right now,” Mr. Harper said.

“We’ve already taken steps to limit the growth of our health-care spending. … We must do the same for our retirement-income system.”

He said he plans to make Canada’s old-age supplement program sustainable. What that means is unclear. He did not spell out whether seniors will have to wait longer to receive the benefit or whether clawbacks would be increased for higher income earners.

Unlike the Canada Pension Plan – which is supported by a separate and well-financed pool of savings – there is no pot of cash to support the OAS program, which is paid out of government revenues. A recent actuarial report pointed out that the cost of OAS will climb 32 per cent between 2010 and 2015, and OAS payouts to retirees will rise to $108-billion in 2030 from $36.5-billion in 2010.

While future changes to OAS were not explained, Mr. Harper said current retirees will not be affected. The major policy reforms are in addition to looming spending cuts, which Treasury Board President Tony Clement said on Thursday could be as much as $8-billion, twice the $4-billion target announced last year.

Mr. Harper further outlined the blueprint for his government by ticking off a list of policy priorities. He said Canada’s investments in science and technology had produced poor results and were a “significant problem for our country.” He said he intends to pursue free trade with the European Union and India and find new energy markets beyond the United States. Regulatory delays for mines and energy projects are also being targeted.

Mr. Harper said he intends to tackle immigration reform, a thorny issue in a country where one in five is an immigrant. Canada’s humanitarian obligations and its family reunification objectives will be “respected,” he said, but the needs of the labour force and the economy will now be central.

Citizenship and Immigration Minister Jason Kenney has been working on significant reforms to the immigration system for several months. Mr. Kenney has said he wants to speed immigrant integration in the labour market by changing the emphasis of selection criteria. He intends to reward applicants who speak English or French, have job offers, Canadian work experience or postgraduate degrees, all of whom tend to fare better economically. The increased emphasis on economic immigrants could lead to reductions in the family class.

As the Canadian population ages, immigration is increasingly the major source of population growth. At the moment, more than 60 per cent of population growth comes from immigration, but that will approach 100 per cent by 2030. If Canada wants to maintain its population structure, or at least the proportion of the population that’s over 65, it would have to start admitting about three to four times its annual intake of roughly 250,000 immigrants, experts say.

As for OAS, previous Liberal and Conservative governments have tried – and failed spectacularly – to make the program financially sustainable. Both Brian Mulroney, and Paul Martin when he was finance minister, were forced to back down in the face of public pressure.

C.D. Howe Institute president Bill Robson said he believes the public will support changes if they see MPs and the public service scaling back their benefits as well.

“As seniors get more numerous, it’s clearly more difficult for politicians to take them on,” he said. “But I’m encouraged to think Canadians can get together on things like this.”

With reports from Jane Taber in Ottawa and The Canadian Press in Davos, Switzerland