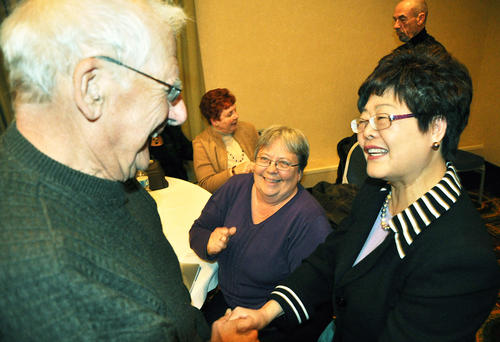 By Jason Miller, The Intelligencer

People nearing retirement or already retired will not be affected by the proposed changes to Old Age Security, said the Minister of State for Seniors.

Alice Wong assured a group of Belleville seniors, during a meeting here Thursday night, that they will be protected from any shortfall and those who are years from retirement, will be given ample notice of any potential overhaul of the system.

“No senior who is currently receiving benefits will lose a penny,” she told the group of about 100, who gathered at the Fairfield Inn and Suites. “Those who are near retirement don’t even need to worry.”

Wong told the group that the proposed cuts have nothing to do with Canada’s surging deficit, and that much of what has been circulating through the media about the government having an hidden agenda is “false information.”

“Don’t listen to rumours,” she warned. “This has nothing to do with reducing the deficit.”

The meeting, slated to address issues such as elder abuse, was dominated by talks about the federal government’s push to raise the Old Age Security benefits age from 65 to 67.

After delivering a prepared address to the group, Wong was pelted with numerous questions about how the changes will affected people of various ages and financial status.

Wong said because of the rapidly aging population, the government foresees numerous challenges, and is implementing measures to avert a collapse of the OAS program.

Currently one in seven Canadians is a senior and that number will climb to one in four in 25 years. OAS payouts to seniors are projected to climb to in excess of $100 billion in 25 years, up from the current figure of about $35 billion.

“Striking this balance is not a choice, it’s a necessity,” she said. “We want to do it in a prudent way, so that the whole system is sustainable.”

Wong’s visit coincided with the general meeting of members from the local branch of the Canadian Association of Retired Persons.

Debbie Butler’s hope is that if OAS changes are implemented, it will come through a multi-year phase in process.

“People need a lot of time to plan,” she said. “Most people who are in their 50’s are already planning for retirement. You’re going to need at least 15 years to re-route.”

Butler said the minister’s visit helped clarify some of the doubts that lingered, but overall, she wasn’t impressed with what she heard.

“I think they have a script and they follow that script,” she said.

Don Anderson, 72, had a different take on the controversial OAS topic. He said the government has to place the subject on the table, to see how seniors will respond.

“It’s not a surprise what Wong is telling me,” he said. “If the Canada Pension Plan is as stable as they say it is, then there is nothing to worry about.”