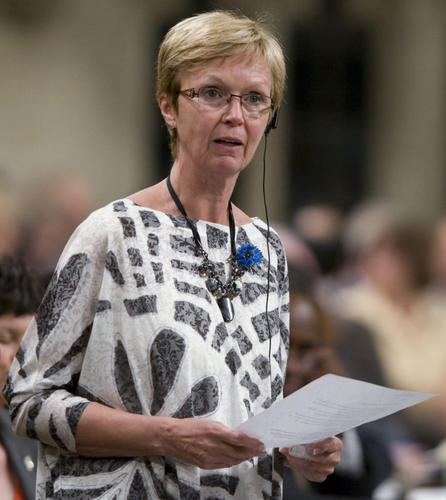 It’s simply not right to ask seniors to delay their retirement by two years to pay for misguided Conservative priorities.

It’s simply not right to ask our children to delay their retirement.

With Stephen Harper’s cuts to OAS, our children will be worse off than their parents.  That’s not what you and I worked so hard for.

The Conservatives want to delay Old Age Security benefits by two years.  They’re forcing Canadians to work until age 67 because, they say, there’s just too much else to pay for. They claim to be protecting retirement security—by making sure our children’s’ retirement is less secure.

Like his failed fighter jets, which cost a whopping $30 billion. Or his $19 billion prisons agenda. Or his corporate tax cuts, which cost Canadians $3 billion this year alone.

The truth is that OAS is sustainable.  Independent experts have said so.  The independent Parliamentary Budget Officer has said so as well.

There’s no telling how Mr. Harper’s plan will hurt vulnerable seniors. I’ve spoken to too many seniors who struggle to pay their bills and are even forced to use food banks. Asking them to get by with even less is simply unacceptable.

After a lifetime of helping to build this country, our seniors deserve better. So do our future generations. But Harper’s plan is to balance the budget on the backs of those who are struggling to plan for retirement.

New Democrats have a better plan. We want to strengthen the Canada Pension Plan so future generations can retire with the comfort they deserve. We also want to increase the Guaranteed Income Supplement so no senior has to live in poverty.

New Democrats are with you in this fight.  We’re taking on Mr. Harper’s out-of-touch OAS cuts. We’ll continue to fight to give seniors a break—today and tomorrow.