Money, it’s a gas, Grab that cash with both hands and make a stash.

That’s all anyone talks about as it is February and The Fear Factor is upon us. I am not referring to that banal television program where greed trumps common sense in the hopes of scoring an easy buck.

I am referring to the onslaught of advice from financial experts during RRSP season who are telling us we can’t possibly afford to retire if we don’t have at least a zillion dollars tucked away.

Their sales pitch is relentless and unnerving.

They are urging us to pay ourselves first and maximize our RRSP contributions. And to top up our TFSAs while we’re at it.

Don’t forget to eliminate our consumer debts and pay off the mortgage. And we must save, save, save. Because Zoomers are not saving enough for their retirement.

One bank tells us one in three expect to retire comfortably and taunts us with a “Let’s figure it out.”

Only one third of Canadians have a defined pension, one third has investments which have been hit hard by the economic downturn and one third has nothing at all.

And for many of us who were working but were laid off or downsized during the recent recession, it has made it even more difficult to save for retirement.

And then there is Mr. Harper’s government which is determined to raise the age at which we Zoomers can apply for our Old Age Security pension.

And this year, those of us who are considering taking their Canada Pension benefits early will be penalized more than before.

As baby boomers, who grew up in the “me generation”, we had a sense of entitlement. We never really wanted for anything or had to go without. If we desired something, by golly, we would have it.

Rather than worry ourselves into an apoplectic fit that we are heading for a frugal life of abject poverty in our retirement years, I suggest we consume less.

Try doing without for a while. Spend less. Use less. Downsizing is sexy.

There is no need to keep up with the Jones any longer as the Jones are also feeling the pinch.

Now I am not suggesting you go out and buy your spring wardrobe at the thrift store or live on water and gruel.

Recycle an old outfit and add newer accessories. But please don’t get carried away by resurrecting your padded shoulders and leisure suits.

Listen to Pink Floyd on vinyl.

Do you really need that overpriced double whip latte?

Stroll on the beach…it’s free. Have a conversation with a stranger…no cost involved.

Check out books from the library instead of buying them. Join a book club and share them.

Invite a friend over for a meal instead of going to a restaurant where the bill is inflated due to the wine consumed.

So pay no heed to those financial fear-mongers. Just do the best you can.

You can always go back to work.

I hear Jimmy Pattison is hiring. 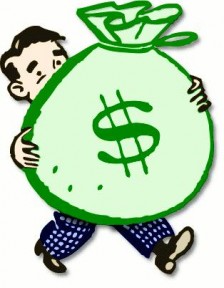