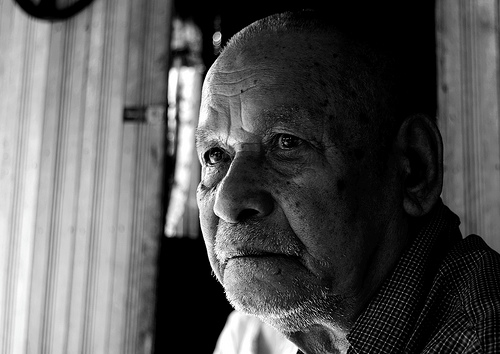 Youngest sister is my widowed 88 year old father’s caregiver; I’m just an occasional visitor. Here’s a report in her words:

“So my dad has been at Serenity Towers for almost four months. The place is gradually filling up, getting new residents every couple of weeks – I know this because the elevators get lined with padded quilts for their moving day. My Dad has settled in to a very knowable routine: breakfast at 8:30, lunch at noon sharp, dinner at 5 sharp (a terrible thing to have it so early). Dad complains about the many long hours from dinner to breakfast. He spends most of his time in the horizontal position, his hearing aids removed which means when the phone rings he cannot hear it. So you have to know his schedule to reach him on the phone.

I drive to Serenity Towers about every second day to either visit, have a meal with him there, take him out for a medical appointment, shop at the drug store, or have dinner at my house. I try to speak to him daily, which is not hard because he phones me a lot, usually about minor things (best I not carry around my BMO debit card, which gives me access to his funds, in case someone steals it from me and takes all his money – or, make sure I lock the car whenever I drive it so that no-one steals the handicap sticker – or, can I buy him some orange juice and new hearing aid batteries). I cannot fathom what this would be like if I were not self-employed and somewhat in command of my own schedule, and able to do things for him during the day.

In the meantime his health is in gradual decline. It was as if he was keeping it all together when living independently in the Maritimes, but once he landed in the comforts of Serenity Towers where he was warm, safe, secure and fed, he could let go. Since arriving he has been diagnosed by his new young doctor with both congestive heart failure and chronic obstructive pulmonary disease. This sounds alarming but really isn’t: it just means his heart and his lungs are slowly giving out. The result is no energy and a lot of sleeping, sort of like an old dog or cat. Eventually he will need an oxygen tank and won’t be able to get out of bed.

Tomorrow will be a difficult day as I will be talking to him about his HOUSE IN THE MARITIMES. He left it before Christmas with a realtor trying to sell it at his vastly inflated price. Unbeknownst to him I have been paying someone to walk through the house twice a week to check on heat and water, and to change up the lights and to keep the mailbox and front step tidy. I have also been paying a man to come and clear the snow. Soon the same man will be paid by me to cut the grass. His listing eventually expired and as agreed we have placed the house with a very aggressive local realtor. The prognosis is now in, and no surprise to me: his price is far too high and there is no way this house can be sold without a drastic reduction.

In four months I have been making many small decisions for my father and have been attending to his every need and wish. His spirits ebb and flow, on a good day he thinks he might drive his car and on a bad day he wonders why he is still living. His house is a millstone that sits 1,000 miles away costing him taxes, insurance and heating and costing me basic maintenance and a fair amount of worry. The though of dropping his price 15 or 20 percent, then paying a further 5 percent commission on the sale, will be incomprehensible to him. I am gathering my resolve to simply let him have his way and to stop worrying about it, except I know the realtor won’t even list on my father’s terms. This will mean the house sits there, unlisted and with no potential for a sale.

Of course, at issue here is not the price of real estate. Over the past few years I have learned from experience that my father has to find his own way to good decisions, but they become increasingly elusive as he gets older. I have learned to let him decide, provided his decisions do no harm to himself or others. His house can sit there, neglected and battered in the Maritime weather, if that is what he wants. I wish I knew how to get him to trust me to make some of these big decisions with him. This is the great mystery, and there is no rule book to guide us both along. He was once a very capable man, in charge of his domain and now he is mostly bewildered by the environment and events around him. And he is as stubborn as can be.