Susan Eng Returns to CBC's Power and Politics; Explains the Impact the OAS Changes will Have on Younger Canadians - CARP
Join Donate Sign In 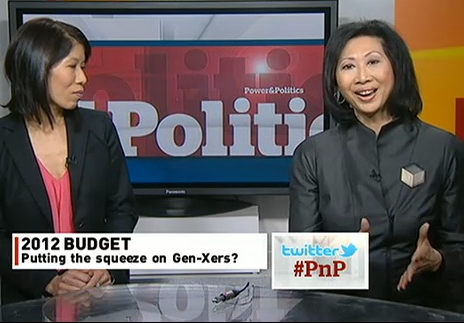 April 5th 2012: CARP VP of Advocacy Susan Eng was on CBC’s Power and Politics again this week to explain CARP’s position on the OAS changes. Susan explained that even though most CARP members won’t be affected by the changes they still oppose them because they believe that the next generation of Canadians should also have a retirement income safety net. Changes to the OAS will force the next generation of Canadians who have poorly paid, physically draining jobs to either hang in there for an additional two years or go on welfare at age 65. See a video of the Power and Politics episode below. Susan’s segment begins at 1:47.