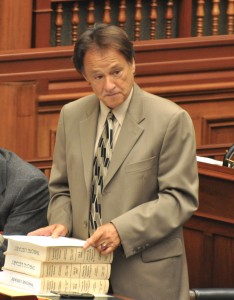 This article was published by Bulletin News Niagara on June 1st 2012.  To see this article and other related articles on their website, please click here

TORONTO – Kim Craitor slumped back at his second-row desk in the government benches, wiping tears from his eyes as politicians from both sides of the house stood and applauded.

It had been a long haul for the Niagara Falls MPP, one that still is far from over. But with the unanimous passing Thursday afternoon of the second reading of what has become known as the grandparents’ rights bill, Craitor believes this time his private members’ legislation is closer than ever to becoming law.

“It was really nice,” said Craitor, not long after receving hugs, kisses and handshakes from a Liberals, Progressive Conservatives and New Democrats alike.

“It does kind of take you back.”

ot long after the vote, Craitor was joined in the main lobby at Queen’s Park by eight grandparents who have watched and supported Craitor’s long and often frustrating attempts to keep the cause alive.

Among the supporters who travelled from across Ontario to Toronto to watch and listen to the debate in person was Mike Sherman, who played for the Memorial Cup winning Niagara Falls Flyers in 1960.

Sherman and his wife haven’t seen their grandchild for five years.

“We certainly appreciate all that Kim is doing for us,” said Sherman, who now lives near Leamington.

“Some people have been working on this for 30 years. It’s not done yet, but Kim says he feels good about its chances this time.”

The latest incarnation of the proposed law is known officially as Bill 67: Children’s Law Reform Amendment (Relationship With Grandparents) 2012.

The bill seeks to strengthen the ability of judges to consider the rights of grandparents when deciding child custody and access isues.

This is the fouth time in eight years Craitor his tried to shepherd his bill through the Legislature.

Last year, an earlier version of his bill passed second reading and was referred to committee for study only to die on the order paper when the term of the last government expired and an election was called.

A re-elected Craitor re-introduced the bill earlier this year.

This time around, Craitor has few things going for him he didn’t have in the past.

First, the bill is being considered by a minority parliament. With strong support from Tories and New Democrats the bill has added momentum and stands a better chance of becoming law.

Second, Craitor has powerful new allies in his personal crusade.

It’s the type of official endorsement that could make all of the difference as the bill moves forward through the committee stage and public hearings, expected later this year.

The bill also has even stronger support from the government benches, where a mixture of new and veteran Liberal MPPS spoke out in favour of the legislation during Thursday’s debate.

That too bodes well for the bill’s future progress, since a firm demonstration of caucus support will be needed to encourage his own government to call the bill to third and final reading.

“He certainly is tenacious,” said St. Catharines MPP and Environment Minister Jim Bradley, who wasn’t planning to stay for the late-day vote, but in the end decided it was too important a moment to leave.

“I am glad to be speaking on this bill again,” Jeffrey said when she rose from her seat to support Bill 67.

Historically, said Jeffrey, grandparents “have had no legal rights of access to their grandchildren simply by virtue of their biological relationship.”

Legislation in all Canadian jurisdictions now makes it possible for grandparents to apply for custody of or access to their grandchildren.

However, she said there is no jurisdiction in Canada, which provides grandparents access as a right.

That should change, Jeffrey said.

“There’s no question that in most cases, the continuation of an existing grandparent-grandchild relationship is often in the best interests of a child. Similarly, relations between a child and other family members such as aunts and uncles, siblings, step-parents, step-grandparents and step-siblings can often be and are tremendously beneficial to a child’s welfare and their development,” she said.

“Grandparents are often a family’s first reserve in a time of crisis. They act as playmates for their grandchildren, role models, family historians, and mentors, and they help lay a foundation for healthy self-esteem and security in children. They’re really an important safety net.”

During his speech in the House, Craitor dedicated the bill to his own foster parents, who he said were more like grandparents to him.

“This bill is more than a bill to me. I want to dedicate it to two very kind and special people. I never knew my parents. I never met them; I don’t know who they are. But two elderly people took me into their house and kept me and raised me. They were more like grandparents than parents, and by the time I was 16, they had both passed away. I often think, when I look at my life, how fortunate it was that these two elderly people decided that they would raise me, give me some of their values, give me some of their best advice.”

Craitor continued: “When the grandparents came in to see me, to talk about not having an opportunity to see their grandchildren — Nick and Mary Craitor came (to mind.) I remember thinking how fortunate it was that these two people believed in me, as a child, even though I wasn’t their child, and took me in.

“So this bill has never been about just a bill. It has been a bill that I very passionately, truly believe in, and that’s why I’ve been committed in every way I can to having the bill get through. So I want to say for the record – and I never thought I’d have an opportunity to say this in Parliament – to Nick and Mary Craitor, I owe you everything, and I thank you for that.”