It’s rare for a person to remember exactly where he or she was at a single moment in time, some four decades past. It’s rarer still for an entire nation to hold a collective memory of such a moment. This kind of hardwired retention usually results from group trauma — the shock of assassination, large scale tragedy, or natural disaster.

Occasionally, the event that galvanizes a population is a happy one. Such was the case when Paul Henderson scored the memorable goal in ’72, which won the game and united Canada.

The book “The Goal That United Canada, 72 Amazing Stories by Canadians from Coast to Coast” string together stories that tell a larger story, a uniquely Canadian story of love for our country and its game.

We’ve tried to select stories that are visceral, show emotion and provide behind-the scenes insights that you may not have read about elsewhere. It’s been interesting to interview people who, back in ’72, were not the celebrities we know today. Before Blue Rodeo was a great Canadian band, before Glenn Howard won multiple Brier’s, before Terry Fox became a national hero.

The Summit Series becomes the focal point for Canadians to express themselves. Their comments are sometimes funny, sometimes poignant, often passionate, and always engaging. Some saw heroism, some patriotism, some a kind of coming-of-age for Canada. Some saw or heard Game Eight from the tops of telephone poles, others in coal cars or cardiac care units. Some were lucky enough to see games in person, either in Canada or Moscow. But the physical vantage point didn’t matter as much as the viewpoint they brought to the event and the one they came away with. It’s a diversity of thought and opinion that reflects the best of who we are as a people.

In addition to the book, a special 40th Anniversary celebration will take place at the Hockey Hall of Fame on Friday, September 28th. Inspired by the book, there will be a number of speakers that give a number of different perspectives including Bob Cole of Hockey Night in Canada, Zoomer’s Moses Znaimer and Game Two referee Steve Dowling. Attendees will also be able to have their photo taken with the Raithby stick (1 of 5 Paul Henderson sticks from Moscow).

This book and event will bring back the incredible feelings and memories that united our great country forty years ago. 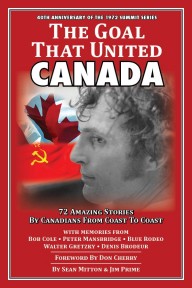