The Rise and Fall of Tattoos - CARP
Join Donate Sign In

They are everywhere…everywhere I look.
I can’t escape them.
Walking on the White Rock promenade on a recent beautiful sunny day and there they were assaulting my senses.
Tattoos.
Tattoos on bodies of all shapes and sizes.
Now tattoos have been around for five thousand years so it is nothing new. Warriors and tribesmen sported them. In some cultures tattoos are considered a sign of beauty. Body art or a symbol of belonging.
Tattoos on men…well I guess that is a manly thing. Popeye and other sailors have tattoos. So do motorcycle gang members. Macho men. Wrestlers. My neighbours. Convicts. And David Beckham (sigh).
But tattoos on women. I hate them.
Right up there with Botoxed plasticized foreheads and Rocky Balboa lips…I am not sure what I dislike more.
A blur of black ink and colour on taut, youthful skin. . Angel wings sprouting on shoulders and snakes crawling up thighs. Celtic crosses and names of loved ones written along one’s arm. Roses crawling up ankles and “tramp stamps” peering down buttocks.
I hate them all.
I approached young, nubile Danielle, 19, who was sporting an inked concoction of Italian words “La Fede Nel Destino” emblazoned on her right shoulder. She assured me the words Life and Destiny had great meaning for her as it reminds her “everything happens for a reason”. Sounds great but she would get a torticollis in her neck if she ever tried to turn her head to admire it.
It’s all wonderful when one is young and firm but what on earth will those tattoos look like when advanced age and gravity takes over and mocks us?
Time to chill I said to myself.
So I headed off to the B.C. Seniors Games where CARP chapters from the Lower Mainland were gathering. The Games are celebrating 25 years with over 3,000 athletes over the age of 55 participating with the oldest being 91.
Forget about your hate-on of tattoos. Find another story here at the games I told myself. Something that would interest my Zoomer readers.
I met Dorothy, 84, who has been participating in the games since its inception and has won 20 medals. Despite her stroke, she continues playing badminton. Now there’s a story.
I chatted with Marg, 73, who despite her ankle replacement, still floor curls. “I still can’t play the piano though!” she quipped. Now there’s a story.
Betty, 88, from Grand Forks, who swims 800 meters or 32 lengths of the pool and has set five Canadian world records. I’m on a roll now!
And there it was staring right at me.
A near collision with a tattoo on the toned back of Marni, 64, who was a slo-pitcher from Kamloops. When I asked her what the aberration on her back was, she explained it was “a white and black angel which represented both sides of her.” I said it looked like a black blob.
Her friend Dee, 60, is planning to get a butterfly tattoo on her shoulder. She has opted not to put it on her breast. “I don’t want one saggy butterfly turning into a flock!” she mused.
Linda, 66, from Cache Creek is “making a statement” with a planned third tattoo as they are “addictive” but always aims for “parts of the body which don’t sag.”
I like these spunky gals I decided.
Maybe I need to reflect on my feelings on this subject while I listen to an old Rolling Stones album… Tattoo You. 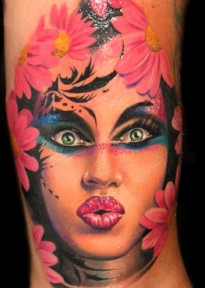