Caregiver wants $175,000 to give up claim to elderly woman’s home - CARP
Join Donate Sign In 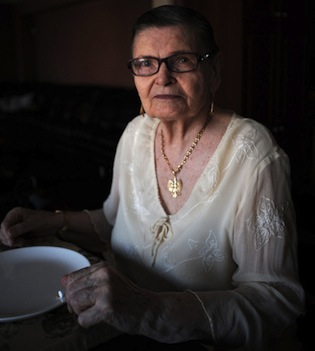 The personal support worker who legally owns widow Stella Wasiuk’s Ajax home says she will give it back — for $175,000.

Pauline Reid, who vanished amid police and Star investigations into her treatment of the 84-year-old woman, is making her demand from the shadows rather than in open court, where she has been noted as being in default for not filing a statement of defence. Reid — Wasiuk’s former caregiver — has also asked Wasiuk to drop a lawsuit accusing her of “unconscionable exploitation.”

Wasiuk sued Reid in March,accusing her former caregiver of mistreating and manipulating her into buying a $477,000 house. After that, Reid ended up as the registered owner of the home and Wasiuk had only a life interest in the property. Wasiuk wants the title to the house to be given to her.

Reid’s demand for $175,000 from the widow is contained in a letter sent by lawyer Susan von Achten to Wasiuk’s former lawyer, Alexander Jozefacki. In it, von Achten says Reid and her family have been “homeless” since Wasiuk’s then-neighbour, Emile Timmermans, who now has power of attorney for Wasiuk’s care, changed the locks in March under police supervision.

Caregiver Reid says she is “content” for the house to be sold as long as she receives money “to cover all her losses and suffering.” She also wants the lawsuit against her dropped and wants 15 days’ access to remove her personal property and furniture. Wasiuk says she paid for most of that furniture and property.

Wasiuk’s case is a cautionary tale for all seniors. A vulnerable elderly widow, with no children or close friends, ended up living with a cast of characters, including Reid, Reid’s son — who was facing drug trafficking and gun charges — and Reid’s boyfriend, a self-professed Haitian prince and practitioner of voodoo, according to one source who knew the man.

Wasiuk moved out of the Ajax house and into the long-term nursing home in January on the advice of police and social workers, who were concerned for her well-being. She said she is worried about having enough money pay the $3,000-a-month bill for the nursing home because legal bills to put the house’s title in her name have cost her about $55,000 so far.

“My concern is that I won’t have enough money to pay for my room, the way the money is disappearing to the lawyers,” Wasiuk said in an interview. “It’s disappearing very fast.”

“That’s between my client and myself, but I can tell you I want to finish this as quickly and as inexpensively as possible,” Jozefacki said, adding that he was in “delicate negotiations” with counsel for the elusive Reid.

Late last week, Wasiuk removed Jozefacki from the case and plans to represent herself with the aid of former neighbour Timmerans.

In her demand letter, von Achten claims Reid is under a doctor’s care for serious stress. “Ms. Reid’s loss and suffering is enormous,” the lawyer writes, saying Wasiuk has “defamed our client and made serious allegations, or inferences of fraud against her.”

In a brief telephone interview, the veteran criminal defence lawyer said she would not allow Reid to be interviewed or discuss her current whereabouts. “You will get nothing from me, absolutely zero,” said von Achten. The lawyer previously defended Reid’s son, Justin Brefo, on numerous gun and drug trafficking charges laid by Peel Regional Police in Brampton.

Brefo, 24, who at one time was both executor and a beneficiary of Wasiuk’s will, was sentenced to 18 months in prison in 2010 for possession of a restricted weapon, a 9-mm Glock pistol. The other charges were dropped. Wasiuk was never aware of Brefo’s brushes with the law. She has now made Timmermans her executor and named several charities as beneficiaries in her will.

Wasiuk, who relies on a walker to get around, first met caregiver Reid at the St. John’s Rehabilitation Centre while recovering from knee surgery in 2008. She confided to Reid that she was petrified she would end her days in a nursing home.

Reid offered to look after her, and in June 2009 moved Wasiuk out of her luxury condo apartment in Markham and into a cramped semi-detached house she was renting in Scarborough, where she lived with her boyfriend, Joseph Comas, and two children.

Reid then pressured Wasiuk to use the proceeds from the sale of her condo to buy a house in Ajax, with Wasiuk providing all the funding for the $477,000 purchase, according to the lawsuit filed in Superior Court in Oshawa.

Just days before moving into the Ajax house the two women entered into a “home care agreement,” with Reid to provide lifetime care to Wasiuk in exchange for a “loan” to buy the house. Wasiuk says she did not understand the blizzard of documents she was asked to sign, which led to the title of the property being in Reid’s name alone and Wasiuk having only a life interest in it.

The agreement called for Reid to pay off the interest-free “loan” by providing $800 a month in caregiving, “including food and necessities of life.” If at any time Reid stopped providing care to Wasiuk, the loan was due immediately. Reid could not sell the house without Wasiuk’s permission but, if Wasiuk died, Reid would own it “free and clear of any claim whatsoever.”

Those documents handcuffed the police investigation earlier this year into alleged fraud and elder abuse, said Det. Doris Carrière, of the Durham Regional Police Service’s major fraud unit. Wasiuk did not help her case by signing legal documents stating that she understood the agreement and accompanying Reid to the bank on several occasions for large cash withdrawals, sometimes for as much as $10,000.

“I think (Wasiuk has) a strong case on the civil side,” Carrière said.

Wasiuk’s lawsuit claims that as far back as 2009, Reid isolated Wasiuk in the home by taking away her contacts’ telephone numbers and personal financial documents, and restricting her access to the telephone. The lawsuit, which has not been tested in court, said Reid threatened to abandon Wasiuk in order to “exert influence” over her.

According to Wasiuk, on many occasions when she was alone in the house the main-floor bathroom was locked, forcing Wasiuk to navigate the stairs to the second floor to use the bathroom there.

“I was completely isolated from the outside world,” Wasiuk says in her affidavit, saying Reid constantly threatened to abandon her if she didn’t do what she asked. “I was threatened that if I didn’t acquiesce to her demands that she would not take care of me.”

Also living in the house was Reid’s boyfriend, Comas, a self-professed Haitian prince who, according to one man who earlier met Comas, was a voodoo practitioner. Reid often assisted him in the ceremonies, the man said.

Last October, Wasiuk asked next-door neighbour Timmermans for help, and he has watched over her affairs ever since.

Reid’s recent demands prompted Wasiuk to visit the now-vacant Ajax house to check for items left behind by Reid last spring. Among them she found a book on wills and estates, and another called Voodoo and Hoodoo, which describes the original West African set of beliefs, as well as how to cast voodoo spells.

According to the book, someone facing serious criminal charges can bring about a “hung jury” by cutting a hole in a cow tongue and inserting a piece of parchment paper with the names of the judge, prosecutors, and jury members.

Page 182 contains explicit instructions on how to “freeze the mouths of those who would testify against you.”

“Write the names of your opponent, his witnesses, and his lawyer on a piece of parchment paper. Place it between two bricks,” the book explains. “On the day of the trial set a bucket full of ice on top of the bricks and your opponents will be unable to testify against you.”

Timmermans said he found an egg and a penny on his doorstep the morning after he first came to Wasiuk’s rescue. He has no idea what it meant, but it rattled him. He threw the egg in the garbage. Both the egg and penny are used in voodoo spells.