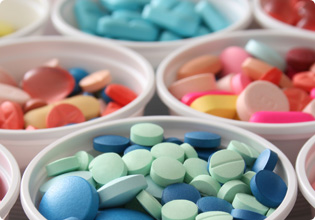 September 21, 2012 – Canada’s premiers recently unveiled recommendations to improve health care as a part of their Council of the Federation meeting. The recommendations came out of a report led by Saskatchewan Premier Brad Wall and Prince Edward Island Premier Robert Ghiz, with bulk purchasing of ‘some’ generic drugs as a centerpiece of the plan.

The report recommends that three to five generic drugs be purchased in bulk so that their prices are lowered by spring of 2013. Although this is a definite step in the right direction in making health care more affordable, it is a small one that doesn’t come close to solving the problems of escalating drug costs for provinces and uneven access and costs for patients. All generic and brand name drugs need to be made more affordable since many seniors with chronic conditions often rely on multiple drugs, and drugs constitute one of the fastest areas of growth in healthcare spending.

Why it matters: Out of pocket drug costs
Figure 1 is a provincial comparison of the out-of-pocket expenses borne by a single/unattached senior who needs 6 drugs priced at $50 per prescription, monthly – the approximate amount the average senior needs and pays for drugs. Using four different income levels, CARP researchers calculated the annual out-of-pocket expenses an individual would pay in each province, above and beyond coverage provided by public plans. 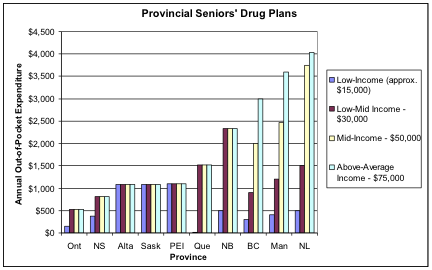 The graph shows the wide range of out-of-pocket expenses paid by seniors from one province to another. Ontario seniors pay the least across the board while seniors in most Maritime and Western provinces pay considerably more, depending on one’s income bracket.

Catastrophic drug coverage is the general level of coverage provided by some provinces in order to protect individuals from out-of-pocket drug expenses that may lead to undue hardship. This type of coverage varies considerably across provinces. While New Brunswick and Prince Edward Island are still without catastrophic programs, other provinces have measures in place that help contain drug costs to anywhere from 2% through 8% of income. 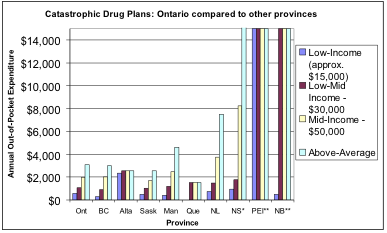 **PEI and New Brunswick do not have catastrophic coverage. There may be other drug programs available.

Figure 2 compares catastrophic programs across Canada. It shows yearly out-of-pocket expenditures for a basket of 6 drugs that cost $500 each, totaling $36,000/year, based on province and level of income.

Ontarians who qualify are amongst those who pay the least in out-of-pocket expenses on drugs. The Trillium Drug Program provides coverage to applicants who are under the age of 65 and have high prescription drug costs in relation to their household income. Ontarians with drug costs exceeding 4% of their income (the deductible) pay a maximum of $2 in copayments per prescription.

British Columbia, Manitoba, and Quebec have income-tested programs that cover all residents, regardless of age. In Ontario, despite the roughly 4% cap on out-of-pocket drug expenditures, seniors still pay significantly less for the same basket of drugs as would the rest of the population.

Getting on with Drug Reform

Drugs are essential to good healthcare delivery, whether you’ve had a serious acute medical issue or are dealing with longer term chronic conditions. Currently, Canadians governments spend in excess of $25 billion annually on prescription drugs. And by some estimates, comprehensive national pharmacare can save the system $10 billion annually. Add the fact that 10 percent CARP members admit to having skipped a prescription because of cost of drugs and that seniors in one province pay considerably more than seniors in other provinces, and it’s apparent that our current system is not working.

While Premiers are nodding in the right direction with recent recommendations on generic drug reform, tackling 3-5 generic drugs is hardly a bold move. Rather than take a piecemeal approach to this fundamental issue, CARP is urging the provinces to act together to create and implement a comprehensive national pharmacare strategy that aims to achieve greater healthcare cost sustainability for governments and more even access and cost for Canadians.