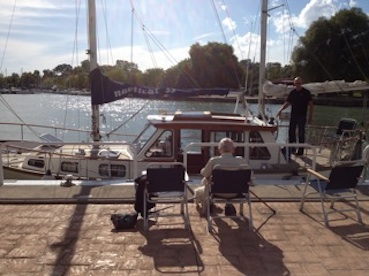 “It’s enormous!”. That was my widowed 89 year old father speaking to oldest brother on the phone. He was sitting an a navy blue deck chair on the patio of the Niagara Yacht Club, cane between his knees, finally looking at my new boat.

I had wanted to show my boat to my father since I got it. It’s exactly the kind of boat he wanted all his life – honest, rugged, traditional. He used to draw it on restaurant placemats for us in his fine spidery draftsman’s hand.

He had owned several boats; an Albacore sailing dinghy he never learned to sail, a classic motor launch he couldn’t dock. But it was the North Sea motor sailer that always had his imagination – sturdy and no-nonsense, and that’s the kind of boat I now owned.

We set off from Toronto in a dead calm, the lake like glass. We had the water to ourselves, no one else out this late in the season.

The crossing took four hours, the auto-helm doing all the work, and the diesel clanking along contentedly. Time to relax, make a sandwich, put away gear.

As we approached Niagara, we entered a field of bulk carriers anchored off the mouth of the Welland Canal, waiting their turns to enter. Although they dwarfed our little craft, we felt like we were playing with the big boys.

We cruised slowly and majestically up between the breakwaters of the old Welland Canal. Dad was on the east bank with my aunt, who had come to help him around.

We landed, somewhat clumsily and with a little embarrassment and help from the old gaffers standing around. Jamie, my crew, and I are still getting the hang of handling a 40 foot boat which weighs as much as a schoolbus.

Dad arrived in my aunt’s car from the breakwater after we had tied up, which was just as well, as I didn’t really need him to see the confusion which always attends this operation.

Dad made the slow, halting trip from the car in the parking lot to the boat at the dock. He stopped to sit several ties along the way. We keep deck chairs on the quarterdeck for visitors, and we set a couple up on the dock. Dad settled into one and carefully looked the boat over.

Just then, oldest brother called from out west. He knew our schedule, and knew we would be arriving at about this time. He spoke to dad. “It’s enormous!” dad said, and then told him how sensible it was, with an enclosed pilothouse for dirty weather sailing.

Dad has been failing lately, succumbing to dementia. He doesn’t know who he’s with and forgets his mealtimes, sometimes showing up at the dining room at midnight. Oldest brother told me when we spoke later, though, that Dad had been on top of his game on the phone. And I had noticed it too. He looked over the boat with a keen eye, taking everything in. He looked at the rigging, asked about the diesel.

He sat there on the deck chair looking at the boat for an hour. When he started nodding off, I gently suggested it might be time to go back to Serenity Towers, but he said no, he wanted to look at the boat for a while longer.

This was more interest and focus than dad had shown for months. His eyes gleamed, he listened, he asked smart questions. My aunt said the visit with the boat had made his week, then changed her mind . “You’ve made his year. He hasn’t had this much fun since your mother died”.

We returned across the lake the next morning at the crack of dawn in a howling wind and driving rain. No matter, it was a fun trip and it made my dad happy. I’m going again this weekend.