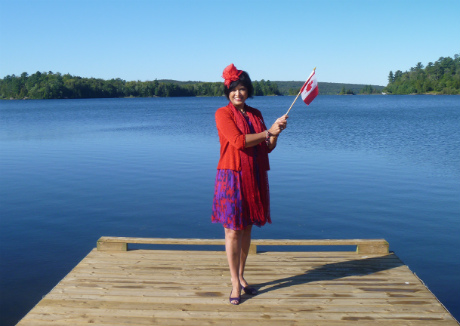 This article was written by Emily Yost, Marketing Director of the Red Hat Society

Who would have believed that a whimsical afternoon tea would have exploded into an international women’s organization over 14 years ago?  Well, that is exactly what happened when Red Hat Society Founder and Exalted Queen Mother, Sue Ellen Cooper donned a red hat and purple clothing when she met a group of friends in April of 1998.  Their only purpose in that fateful gathering was to have some much deserved playtime and celebrate life with good friends.

That simple message had a resounding effect on the lives of women around the world. Today, The Red Hat Society is a global Society with Chapters and Members found in 31 countries!  From the beginning,Canada has been a major contributor to the Society’s Member explosion.  Only under the founding country of the United States, Canada continues to grow while proudly holding a strong second place with Chapters in every province and territory of the country.

RHS enthusiastically connects, empowers and transforms the lives of women approaching 50 and beyond through the power of fun and friendship.   For over 14 years, it has been giving women permission to play again in their lives and watching the positive effects of that much deserved playtime—healthier and happier lives, a renewed outlook on life and friendships that are true and lasting.

What’s the magnetic draw of The Red Hat Society?  Where else can you find so many women, whether close or far apart in age or geography, who are open to new friendships as well as new experiences?  Where else does the sharing of lives lived offer such an opportunity for women to step in and guide each other through situations they, themselves, have enjoyed (or maybe just “ survived?”).  Although known primarily for their fun, there’s no denying the magic found within the Society which leads to relationships that are poised to go much deeper.  Women across the globe join the Red Hat Society and participate by choosing to be a Queen for $39 US annually or a Supporting Member for $20 US annually. Queens and Members in the RHS wear the signature colors of red and purple (for Members over 50) or pink and lavender (for Members under 50) celebrating fun and friendship.

RHS Canadian Queens and Members have shown their commitment to enjoying the fun, social advantages of Membership in the international Society and a fierce loyalty to Canada.  Their efforts have catapulted the Society onto the country’s main stage with recognition by Prime Minister Steven Harper for celebrating over a decade of service for Canadian women.  The Prime Minister stated, “As you mark a decade of service to Canadian women, you may take great pride in your achievements. I know that you will enjoy this celebration of friendship and camaraderie, and that the Red Hat Society will continue to enrich the lives of women throughout the country for many years to come.”

Moreover, the Society has received recognition from the Premieres of British Columbia, Nova Scotia and Ontario for their leadership in making an impact in the lives of Canadian women.  Members in Alberta have also worked with Heather Klimchuck, a Member of Parliament, who was thrilled to offer an official welcome to the Society during one of their many visits.

Throughout the provinces and territories, Canadian Members have worked diligently to receive yearly Provincial Proclamations declaring April 25th Red Hat Society Day in hopes of inspiring other Canadian women to join in on the fun.  The Society was even invited by the City of Cambridge, Ontario to be their guest where Founder Sue Ellen Cooper and CEO Debra Granich acted as the Grand Marshalls of the parade and joined more than one hundred Canadian Hatters as they proudly showed off their Red (and Pink) Hat Style!

The international Society is headquartered in Fullerton, CA, USA (and lovingly called “Hatquarters.”)  This location acts as the Society’s hub of operation and supports Members by connecting them to one another on a global platform. CARP members who join the Red Hat Society can look forward to a plethora of benefits including discounts on CARP membership,  a personalized Red Hat Society membership kit delivered to their door annually (which includes free shipping,) a password protected Member site complete with resources exclusive to Hatters and an online communication tool which allows Members from around the globe to speak 24/7.  Furthermore, the Society is delighted to be working with CARP and will be attending the Zoomer Show inTorontoin October Oct 27th & 28th.  The Society hopes it is the first of many CARP events it will attend across the country.

Hatquarters has made many trips to Canada throughout the years in support of the Membership.  From hosting an international convention in Niagara Falls and visiting remarkable Hatters in Vancouver to sharing the book, “Laugh Lines:  Stories of Inspiration and Hattitude” which include Canadian Members’ stories of inspiration, they are committed to ensuring that the Society is a borderless organization where women are equal regardless of race, creed, occupation, age or geography!  Granich states, “At the end of the day, RHS Members share a common bond that crosses all boundaries and we are proud of that.”

Most recently, CEO Debra Granich visited the country accompanied by two RHS Canadian Ambassadors on a 2,600 KM tour to Northern Ontario reaching six cities and culminating with an event at the CN Tower.

Canadian women are royally invited to join in on the fun and get to know the joy, excitement and power found in the Society by visiting www.redhatsociety.com.   As many Canadian Sisters have shared through countless testimonials, it’s positively changed their lives forever.