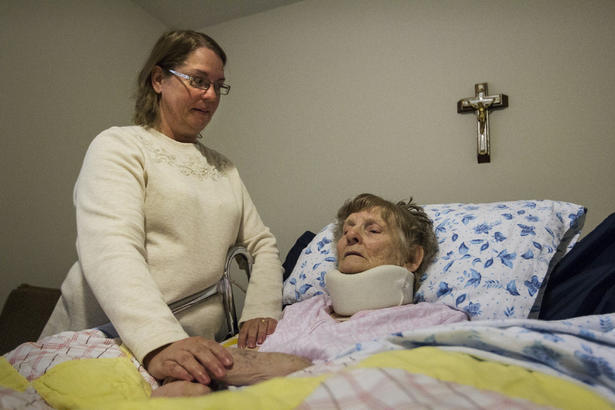 Doris Landry, the 84-year-old who outlived funding for the “Home First” program, will keep the medical equipment, but will not receive the same amount of care from personal support workers.

On Sunday, the Star highlighted the story of Landry, a woman who was given a life expectancy of one or two months when she was discharged from hospital into the “Home First” programming offered by the Central CCAC and Central LHIN. Landry had been given medical equipment and eight hours of daily care from a personal support worker in her niece’s home.

Landry has continued to live beyond the 90-day program maximum. At-home care was cut to three hours a day, and last week there was uncertainty regarding whether the family would be allowed to keep the medical equipment: a bed, wheelchair, lift and oxygen supply. The CCAC had earlier told the Star that the only equipment that might be removed was the equipment not in use. The family told the Star they use all the equipment.

After an hour and half meeting with Central CCAC staff on Wednesday, including CEO Cathy Szabo, the family was assured the equipment could stay and was told there might be subsidies to help buy it, should there be an urgent need for it elsewhere in the system.

“The equipment will stay; that’s a good thing,” said Landry’s niece, Charlene Dunlevy. “I told them, ‘If I do end up not using the chair or the lift, of course I’ll call you up and get you to take it away.’ The hours they can’t do anything with.”

Landry does not want to move into a long-term-care facility. She wants to be able to live out her final days in her niece’s home.

Dunlevy said she asked the CCAC for help finding a retired personal support worker who might be willing to stay with her aunt for a nominal wage during the week, and they said they would see what they could do. Dunlevy had been filling in the gaps herself, but was just offered a job through a temp agency. She has to let the agency know by Friday whether she can accept the office job in Barrie.

Now allocated just 21 hours of care a week from the CCAC, Landry needs care for 10 hours a day during the week, when her niece will be working. Three hours a day will be covered by the CCAC, so the family is looking for someone who might be willing to fill in for a couple of hundred dollars during the week. Landry lives on a simple pension and the family cannot afford to pay a full wage. Care would involve helping Landry eat her breakfast of toast and tea and moving her so she doesn’t develop bed sores. Because of nerve damage, she is not able to move.

“I don’t have the money to give a lot; I wish I did,” said Dunlevy, who will have to turn down her job offer if she can’t find a solution.

In recent years, there has been a renewed focus on home care as a way to save taxpayers money and improve the health of Ontarians. Home care is generally the least expensive model, although high-needs patients who require more care cost the system more.

Health Minister Deb Matthews couldn’t comment on the specifics of the Landry case, but said she had heard similar stories “more often than I want to admit.” She said that’s a “big part” of the reason she appointed Dr. Samir Sinha to be the expert lead on the ministry’s senior care strategy.

“He’s going to be reporting back soon, and I know he’s very much looking at how do we provide the best possible care to people, elderly frail people, keeping them home as much as possible, out of hospital, out of long-term care, and as healthy as they can be in their own home whenever possible,” she said.

Matthews says the ministry knows it can do better when it comes to co-ordinating care.

“We really need to do a better job, because the number of people who are in that frail elderly time of life is growing, and growing rapidly, and will continue to grow. We must do a better job, providing them the care they need in the setting that works best for them and the system,” she said.

Sue VanderBent, executive director of the Ontario Home Care Association, says Landry could be a forerunner “of the start of the system tipping.”

“Because we are at home … we tend to not follow along the same path that health care professionals may have thought, and so the Home First program may have also prolonged her time and contributed to her quality of life. So … you start thinking: ‘If I introduce a program like this, am I going to start to see these sorts of situations becoming more and more prevalent?’”

Dr. Monique Moreau, Landry’s palliative care doctor, told the Star that other patients have indeed been in this predicament, but many are able to pay for additional care through their benefits.

VanderBent said that if there are more and more “exceptional situations” like Landry’s, it can be taken as an indication that extending the 90-day limit might be necessary.

How much does it cost?

According to the Ministry of Health, average costs of providing care are as follows:

(Patients like Landry would be more expensive on a yearly basis because of the amount of care needed.)