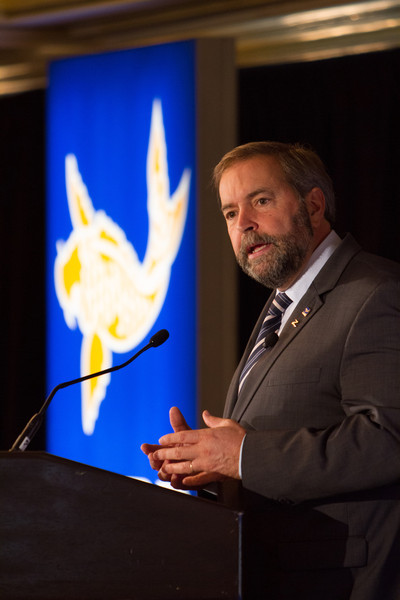 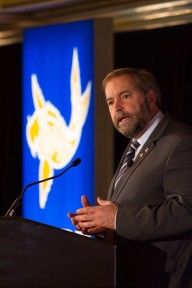 OTTAWA—The next federal election remains somewhere over the rainbow and it is a mug’s game to anticipate what might move Canadian voters in 2015.

But one issue is already set, and it appears a battle for the hearts of the nation’s most politically engaged, most motivated voters is looming.

The New Democrats under Tom Mulcair have now formally committed to rolling back the Old Age Security changes the Conservatives have set to take effect in 2023.

The opposition leader told a forum at CARP, the non-partisan organization which aims to promote the interests of Canadians as they age, that he, in his first year in government, would restore the age of eligibility for Old Age Security benefits to 65.

The Conservatives, in their first omnibus budget bill, used their majority to change the eligibility age to 67, arguing that the fund cannot be sustained under its present structure and that continuing down the existing road would imperil other social programs.

The Conservatives deserve credit for looking beyond the next election, a horizon that is rarely acknowledged by politicians intent on re-election.

But such a bold, fundamental change has sparked fierce resistance among the party’s most important demographic, those voters over 50, even though the changes have been kicked so far down the road that they do not affect those accessing the program today.

Mulcair has rushed in to exploit this void.

New Democrats could be accused of pandering, seeking the support of a demographic from which it has never had support, but CARP is an organization that demands our politicians check their bromides at the door.

CARP, says Susan Eng, the organization’s vice-president for advocacy, will not accept flattery or Pablum.

“I would not call that pandering, I would call it good politics,” Eng said. “It is up to us to us now to ensure he keeps that commitment.”

Older Canadians are not a monolithic voting group, but they have traditionally backed the other two parties. Even in the 2011 election, most CARP members supported the NDP platform but fell back to traditional voting patterns, supporting Conservatives and Liberals.

“But now (the NDP) is a viable alternative to government and that is the key. Our people look at them as that alternative,” Eng says.

Canada has one of the oldest median ages in the world, a factor cited by the government in explaining its changes, but also a trend which makes the older voting bloc the most powerful in the country.

In 2011, a study by EKOS Research found that up to 80 per cent of Canadians over 65 (representing 15 per cent of the population) turn out to vote. Overwhelmingly in 2011, they turned to Stephen Harper.

Frank Graves of EKOS, in his study, found Conservatives struggled to win 20 per cent of the vote in the 18-30 demographic because younger voters turn out to the polls in much smaller numbers. Older voters were the ones who propelled them to victory.

When CARP polled its membership as the omnibus bill was hurtling toward passage it found, for the first time, its membership backed the NDP over the Conservatives.

Harper’s government has consistently argued that they are protecting today’s seniors by moving the changes into the next decade.

While this is true, the Conservatives have missed the point, Eng says.

Mulcair told CARP that there are 300,000 Canadians over 65 now living below the poverty line with thousands more on the brink, especially unmarried senior women who have already endured a lifetime of lower earnings.

“In a country as wealthy as Canada it is absolutely inexcusable to have hundreds of thousands of seniors living below the poverty line, and an NDP government will correct that immediately in its first year,’’ he said.

So check off one of the election battles on your 2015 campaign scorecard.

But let’s avoid an election where the default position is scaring seniors. And woe to the politician who talks down to them.

“That’s my job,’’ Eng says. “We have to educate and speak out in the media so our people can resist the spin and the scare tactics.’’