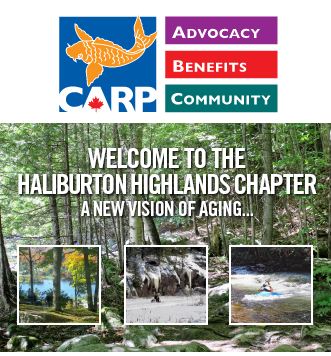 The successful launch, staged at the Haliburton Legion on Sep. 13th, 2012 by one of it’s newest Chapters, impressed the National Office so much that they dedicated an entire page to the event in their Community Development Annual Report with the Heading “Smaller Towns, bigger Commitment”. The Board of Directors were gratified with the recognition that we received while our chair, Bob Stinson, was attending the CARP annual meeting at the Royal York Hotel in Toronto recently. The small Board was justly proud of what they had accomplished and looks forward to growing rapidly into one of CARP’s most productive Chapters.

The first General meeting was held in Minden on Oct. 17th 2012 and a full house was in attendance. The meeting featured two guest speakers. Scotty Morrison, former Referee in Chief of the NHL told some great stories about his years in the National Hockey League and finished up by talking about his current involvement with Community Care locally.

Sargent Bob Paterson, former OPP officer from Orillia and spokesperson for McLennan Group Insurance, finished up the meeting with many valuable tips on protecting yourself from various frauds and what to do to prepare yourself for emergency situations. The next meeting, planned for Dec. 5th, 2012 at the Haliburton Curling Club, will be dedicated to saying thank you to Haliburton County’s host of volunteers who keep many local charitable and non-profit organizations working.

The featured speaker and MC for this event will be Mike Jaycock, well known “morning man” radio personality on our community radio station CanoeFM. Also in attendance will be County Warden, Murray Fearrey and MPP, Laurie Scott to offer their thanks and support to the attending volunteers. The volunteers will also be treated to refreshments and a number of draw prizes donated by local businesses to show their own tokens of appreciation. The event will run from 1.30 to 4.00 PM and everyone is welcome to attend. For more information you may call Chair, Bob Stinson at 705 457-3919 or e-mail at [email protected]