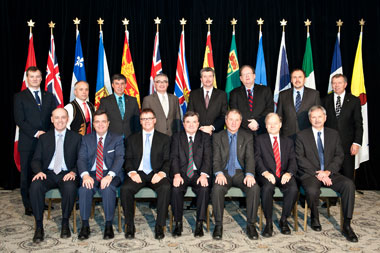 Keep working! Because if you haven’t saved enough for your retirement, the government’s not going to help you – at least not that we can see yet. Maybe something will come out of the Finance ministers’ meeting on December 20th.

Four years after most retirement savings were devastated in the market crash –including those in company pension plans – and two years after federal and provincial finance ministers finally admitted that there was a problem and that government had a role to play in fixing it, there’s little to show for it on the ground.

Approximately 8 million working Canadians have no workplace pension plan, of whom 3.5 million are middle income earners and 4.9 million earn less than $30,000 per year. These are the people who need a supplementary pension plan, something that encourages them to save for their own retirement in an affordable and reliable manner.

At present, Canadians are not saving enough for their retirement. Nearly 25% [maybe more] of middle income earners face a substantial drop in living standards when they retire. So it’s no wonder more Canadians are expecting to work well past historic retirement ages.

And they are not using the existing retirement savings vehicles. RRSP contributions amount to just 5% of the available RRSP tax deferral room. Indeed, some commentators call it a savings crisis, not a pension crisis.

The challenge is to change that – either by mandating savings or by designing a savings vehicle that is so attractive that substantially more people save, and save more than they do now.

The Pooled Registered Pension Plans – brought into law in June 2012 – were meant to entice people to save by offering access to large, professionally managed pooled funds that could reduce fees and increase returns. But there were no guarantees and there has been little public enthusiasm for them. And it didn’t help that some pension experts and business oriented think tanks criticized the PRPPs as nothing more than glorified RRSPs.

In any event, the federal government’s PRPPs now only apply to federally regulated workplaces – like banks, broadcasters or airlines, which mostly have pension plans already. For your employer to offer such a plan in your workplace, the provinces have to pass enabling legislation – which none except Quebec have offered to do.

So, you can imagine the anxiety among the financial institutions which have these plans ready to market to medium sized employers across the country. They’ve already missed this RRSP season!

At this December’s meeting, the provincial finance ministers could decide to move together to enact legislation with uniform provisions and which allows benefits earned in one province to be portable into another province. But they should also consider whether the PRPPs need to be improved to actually convince people to opt in and whether if they do, they will earn enough on their savings to provide an adequate retirement. Which, of course, is the entire purpose of this exercise.

We tested PRPPs and other options in our CARP Polls™ – not surprisingly, people like what they know and understand – CPP. They also know that the current maximum CPP pension is not enough to live on. So many prefer an expansion of the CPP, whether a mandatory or voluntary layer. But when we asked what specific element of the CPP was most appealing, the vast majority preferred a material employer contribution, overtaking even the promise of lower fees or guaranteed returns, not that the PRPPs are offering such guarantees.

Ask a pension expert, not a politician or special interest group, but those who actually run pension funds for a living, what is the best way for employers to help people to save for their retirement in simple dollars and sense and they will say, a defined benefit pension plan delivers the most retirement security for the buck.

But there have been no new DB pensions anywhere in Canada. If you don’t have a company pension now, you won’t be getting one. The only pension everyone can access is the CPP and this is especially true for the smaller workplaces in which there would be no pension at all if the CPP were not enforced by law. More and more experts, especially those who should have the ear of finance ministers, are voicing support for the CPP, not just in addition to, but instead of the PRPPs.

The politicians have heard this too and in June 2010 actually committed to a modest enhancement of the CPP. Somewhere along the lobbyist-littered path, CPP-enhancement fell by the wayside.

The finance ministers should bring the CPP-enhancement back on track. The political climate has changed since Alberta and Quebec vetoed it in December 2011. In fact, the recent Quebec budget explicitly mentioned CPP enhancement in positive terms at page A84.

The finance ministers need to fix the PRPPs so that they stand a better chance getting people to save. The private sector can keep the business of administrating the PRPPs but rules are needed to protect investors with fee caps and predictable returns. Most of all, if PRPPs must remain voluntary, then there must be an incentive for people to start investing in them when they’ve ignored RRSPs and we suggest requiring employer contributions.

After all, what is the point of all this well-meaning effort if it does not attract enough people to save more than they do now to materially improve on the status quo?