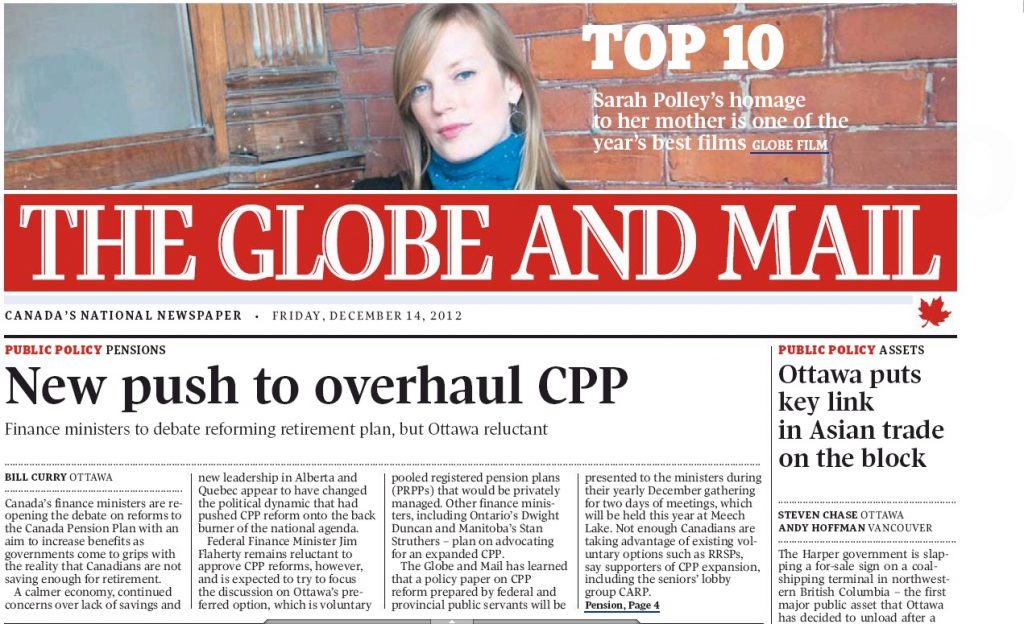 Canada’s finance ministers have announced a “way forward” on expanding the Canada Pension Plan, but put off any decisions until June to make sure the economy survives a potentially rocky few months.

With uncertainty over the so-called fiscal-cliff negotiations in the United States and the unstable economic picture in Europe, finance ministers emerged from two days of meetings saying they need a little bit more time on pension reform.

Federal Finance Minister Jim Flaherty said officials will spend the next six months working on what a modest CPP increase would look like and proposing potential triggers or signs that the economy is strong enough. The markers could include increased economic growth and reduced unemployment.

“We reviewed the work done on the CPP and agreed on a way forward,” he said on Monday after a day of meetings at Meech Lake with his provincial and territorial colleagues, which was preceded by a dinner in Ottawa the night before.

Positive comments from the other ministers on Monday mean that a major national policy move that had largely disappeared from public debate is now very much on the agenda and could be approved by the end of 2013.

“This is an important step forward. I didn’t think we’d come out with this,” he said. “I think what’s important is that we’ll have a report back in six months and this moves the yardsticks considerably.”

Quebec Finance Minister Nicolas Marceau predicted a deal would be in place to enhance the CPP by the end of 2013.

“There is political appetite,” he said, adding that two pension-related reports expected in 2013 will help Quebec shape its position.

“I think there’s enough support for this enhancement to see the light of day,” he said.

Alberta Finance Minister Doug Horner, who represents a province that is seen as the most resistant to CPP changes, said he would wait and see what the proposals look like in June before taking a position.

“At this point, I’m not saying we are or we are not [supportive of expanding CPP,]” he said.

Dan Kelly, president of the Canadian Federation of Independent Business, said his group is disappointed that Mr. Flaherty was not more clear that hiking CPP premiums is off the table. The CFIB has been one of the main critics of a CPP increase, arguing it is unaffordable to employers and will cost jobs.

In contrast, the pro-CPP increase CARP – a national lobby group for seniors – said it is good news that CPP reform is back on the agenda. However CARP vice-president Susan Eng said the ministers’ reasons for delay amounted to “lame excuses.”

“The excuse that the economy is too fragile now to support a CPP change does not make any sense,” she said, noting that CPP changes likely would not start for three years and would be introduced gradually.

Another main advocate for CPP enhancements – the Canadian Labour Congress – called the meeting a failure because it did not produce a definitive action plan.

It’s not clear whether Ottawa will continue to insist that all provinces and territories must be on board before it would approve CPP enhancement. Mr. Flaherty appeared to soften his position on that issue on Monday, noting that the rule for changing the CPP requires the support of two-thirds of the provinces representing two-thirds of the Canadian population.

“I think the rule is two-thirds, two-thirds. That can be accomplished,” he said. “We’ll have to wait and see.”