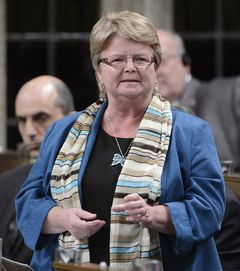 OTTAWA – A major seniors’ group called on the government Thursday to return to routinely mailing income tax forms but the minister in charge she doesn’t plan to take that step.

Revenue Minister Gail Shea brushed off concerns raised by the opposition and a seniors’ group that the new system isn’t fair.

“The way that Canadians file their taxes is changing and we are changing to meet those needs,” Shea said.

Physical forms can still be picked up at post offices and Service Canada centres, or requested over the phone.

But the decision to abandon the proactive mailings forces the millions who filed on paper last year to scramble to get a form, said Susan Eng, vice president of advocacy for CARP, an organization representing people over 50.

The organization wrote a formal protest letter to the minister on Thursday.

“I’m not so much offended by the decision as how it got done,” said Eng.

The government should have given people the option to order a paper form when they filed last year’s taxes, she said.

“We’re right in the middle of tax season, people are wondering where their forms are,” she said.

But Shea said too many of the mailed out forms went to waste.

“Last year, more than 1.3 million packages were mailed out and never used,” she told the House of Commons Thursday in response to a question from the NDP.

“That’s 80 million pieces of paper that ends up in the garbage. We don’t think that’s the best, most efficient use of our resources.”

The NDP say the government should commit to sending out tax packages.

“The Conservative plan to get more people to file their taxes online has security experts raising alarm bells that the new system is opening up greater chances for fraud,” NDP MP Murray Rankin said.

Eng said Internet security is a big issue for the seniors she represents too.

“Not only are they targeted, they’re usually not well organized to resist it just because they’re not involved in this all the time,” she said.

Seniors tell CARP they’re quite happy to use the Internet, even when it comes to their health records, but finances is one step too far, said Eng.

“It’s easy for people to steal your identity and your assets when they have access to that information,” she said.