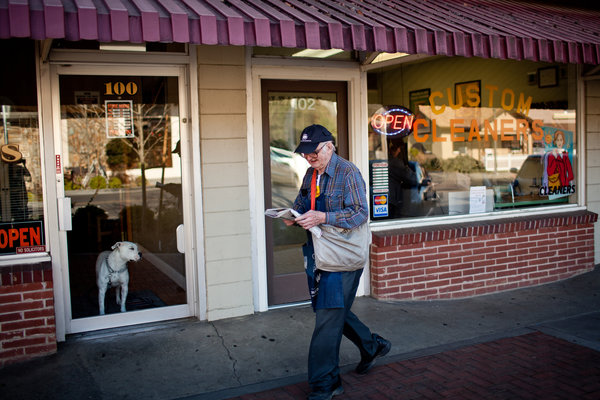 In the troubled newspaper industry, where steady layoffs mean that gray-haired reporters have disappeared from newsrooms as quickly as the typewriters that preceded them, Newt Wallace, a broad-shouldered 93-year-old, has held on.

Every Wednesday morning, Mr. Wallace heads to the dusty, newsprint-scented offices of The Winters Express in Winters, Calif., population about 6,600. He starts his day by placing labels on the freshly printed copies of the 2,300-circulation weekly, slips a carrier bag stuffed with several dozen papers over his shoulder, pulls on his baseball cap and starts his route.

Mr. Wallace, one of eight carriers for the paper, has been walking the same blocks of downtown Winters since 1947. On foot, he briskly delivers to downtown Winters’s businesses the papers, which are filled with local stories like the creation of a new bridge over Putah Creek and the rising value of Yolo County crops.

“I don’t hunt or play golf; I deliver papers,” Mr. Wallace said recently as he walked his route. “I like delivering papers. I get to see the people I know.”

Mr. Wallace’s tenure has now made him a contender for the world’s oldest newspaper delivery person. The Guinness World Records title is currently held by Ted Ingram, who turned 93 on Feb. 14 and who delivers The Dorset Echo to his neighbors in the English hamlet of Winterborne Monkton. But according to Jamie Panas, a Guinness spokeswoman, Mr. Wallace is older than Mr. Ingram by eight months. The transfer of the record title depends on Mr. Wallace’s son Charley, the paper’s publisher, finishing the paperwork that Guinness officials sent him weeks ago.

“We’re not in any hurry,” said the younger Mr. Wallace, adding that his father’s mother lived to 98.

Newt Wallace, who speaks about delivering newspapers the way some people speak of a first love, offers a glimpse into how important news delivery used to be. Around the turn of the 20th century, newspaper delivery boys were a powerful work force, according to David Nasaw, the author of “Children of the City,” a book that helped inspire the Broadway musical “Newsies.”

“They not only sold the papers,” Mr. Nasaw said, “but they were the major form of advertising, because in order to sell the paper, they had to scream the headlines.”

“Paperboy” is also a title that often crops up in the biographies of some of the nation’s most powerful men. Members of the Newspaper Association of America’s Newspaper Carrier Hall of Fame include Warren E. Buffett, John Wayne and Tom Brokaw. In an interview, Mr. Buffett said that even though he had turned down dozens of honorary titles over the years, he accepted recognition for his position as paperboy because “that one hit my heart.”

Mr. Wallace still remembers the thrill of shouting “Extra, extra, read all about it!” on street corners in Muskogee, Okla., in 1930 and being the primary news source for locals who did not have radios. By 1931, at age 12, he had a route delivering The Muskogee Times-Democrat’s afternoon edition.

In the winter of 1946, Mr. Wallace, who had recently finished a stint in the military at the shipyard in Long Beach, Calif., and was working at a paper in Upland, heard that The Winters Express was for sale. He took the overnight train from Los Angeles to Davis, Calif., and walked 10 miles through the area’s walnut orchards to downtown Winters. He bought the paper and the building that housed it for $13,500, running it until 1983, when his son became publisher. After retiring, he continued to type columns on his Underwood, wrote up the town’s history page and took the local temperature. Now he focuses on delivery.

While Mr. Wallace’s shyness and impaired hearing mean he says little when he drops off papers, readers are fondly protective of him. When Mr. Wallace delivered the paper to the Ireland real estate and insurance agency, he placed his hand on the shoulder of the owner, Timothy W. Ireland, and noted that Mr. Ireland’s father had sold him his first house. When Mr. Wallace left a dozen papers at the Winters Chamber of Commerce, the executive director, Mike Sebastian, said he had known Mr. Wallace for 40 years and defended him when tourists asked about his age.

“They always ask me, ‘Isn’t your paperboy kind of old?’ ” Mr. Sebastian said. “There is no way Winters would survive without the weekly paper.”

But newspaper industry experts say the world Mr. Wallace inhabited is gone, just as newspapers themselves have declined. Charles R. Eisendrath, the director of the Knight-Wallace Fellows in journalism at the University of Michigan, pointed out that paperboys had been replaced with adult professional deliverers in cars. They no longer have the same connection to readers.

“It’s part of the disengagement of newspapers from the daily lives with people,” Mr. Eisendrath said. “It was not just paperboys. It was the whole mentality of the operation.”

Like any wise paperboy, Mr. Wallace fills his route with perks along the way. After he drops off papers at the Berryessa Sporting Goods and Mini Market, a convenience store with walls lined with heads and whole bodies of stuffed game animals, he spends $2 on lottery tickets. He delivers three copies of The Winters Express to the Buckhorn Saloon, exchanging them for a beer. John Pickerel, the owner of the Buckhorn Saloon, said he had been welcoming Mr. Wallace for the past 33 years. After appearing in the paper’s police report once in 1984 (he would not say for what), Mr. Pickerel said, he had a new appreciation for how much the paper was read.

“I’ve traded the service of lifelong weekly beers for the stories of Winters, and it’s a good trade,” Mr. Pickerel said. “The paper is a report card for the entire town.”

Still, the job can be tiring, and Mr. Wallace has thought about giving it up.

“He’s tried to quit, but I tell him, ‘Show me three friends who are your age, retired and still alive,’ ” Charley Wallace said. “He thinks about it and goes back to his desk.”