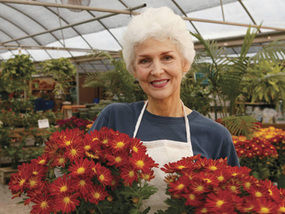 Just when we thought that our generation (Boomers) had helped to eradicate all discrimination – along comes a ‘not too new one’, but one that has taken on some frightening new twists. Age discrimination, once meant that you were not hired because of your age, you are now exposed to harassment and outright hatred, caused of course by ignorance of the facts and realities that the boomer generation face.

Mary works at a poplar Canadian retailer, they hire older workers why?

They don’t book off sick. They don’t spend time texting friends, or talking on the phone while serving customers. They are reliable and pretty much follow the rules at work.

Mary was at work one day, serving customers always smiling and friendly, her regulars love her. She upsells, outstripping most of her co-workers because she has such a great way with people. All in all a great worker, Mary really enjoys her work.

One day, a young man (let’s call him Larry) approached Mary and out of the blue said “You ought to be ashamed of yourself!’

Taken aback, Mary said “Pardon me?” “Larry repeated ” You ought to be ashamed of yourself for working at your age!”

Mary was shocked and could not even speak – the young man walked away. Mary felt hurt and was near tears, but had to carry on with her work.

Larry came back a few minutes later (was not enough he upset Mary) and said ” I didn’t mean to hurt your feelings, but working at your age is  taking her bread out of younger workers’ mouths!”

Again Mary did not know what to say, she was so upset she called her manager in tears and said “I am afraid to be out front in the store, I don’t know what to do.”

Now, maybe Larry was unemployed, but that’s no excuse for his behaviour. He is the one who should be ashamed. His remark was made out of ignorance obviously. Here’s what he doesn’t know.

Mary is 61, Mary has no pension plan, she has worked all of her adult life, raised three great children, who by the way she fed (not taking the bread out of their mouths). Mary has a mortgage, just like Larry does, she has bills to pay and she needs a job. Besides, Mary likes to be busy, her children are grown and out of town, and being a person who likes to be social, her retail job is just what she needs.

Mary is not unlike many others of her generation, who are still working out of necessity or because they are too young to retire.

Larry also doesn’t know is that in both Canada and the U.S, there are more people over the age of 60 than the total of high school and college students*. This means if Mary’s generation do not work, fewer taxes are going toward health care, universities and other public entities. (Thanks Mary!)

These types of interchanges between the generations are no uncommon, unlikely that they will be this drastic, some are just thinking what others are saying. It’s time for our generations, Boomers and beyond to educate the younger generations to support older workers – we are the ones paying the public bills. By the way Larry  (the young man) –You Are Welcome!

*(statistics from Beyond Age Rage – David Cravit) David Cravit will be the featured speaker at the Whaitby, Oshawa Clarington launch, May 30th 2013