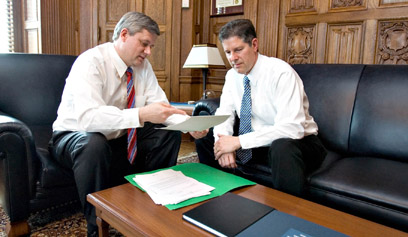 As debate wore on over Mark Warawa’s privilege motion, the metaphors got more convoluted. A party, it seems, is like a hockey team, with a “coach” who chooses which “players” to send over the “boards” to score “goals” in hopes of making the “playoffs,” unless the season is shortened by a “lockout” in which case …

Okay. Let’s have a look at how Warawa’s “team” has been treating him lately. First, a subcommittee of Parliament denies him his right as an MP to bring a motion before Parliament: though clearly advised by the parliamentary expert assigned to it that the motion was votable, and in contemptuous disregard of the facts, the committee rules it non-votable.

Add to that the fact that, morality aside, sex selection on a mass scale in regions where cultural tradition assigns greater value to males over females is skewing global demographics to an extent that will produce negative effects for everyone, and it is clear that we have a problem, Houston.

When Warawa attempts to protest in Parliament at this injustice, he is prevented from speaking. When he appeals to the full committee, he is stonewalled — without public debate, without explanation, without even the courtesy of a question. And when he and other MPs petition the Speaker to uphold their right to speak, they are denounced as “rogue members” and otherwise abused.

This isn’t a team. It’s a mob: mindless, frightened, without purpose or direction except what the leader decides, and unquestioning in its acceptance of whatever the leader decrees.

This isn’t a team. It’s a mob: mindless, frightened, without purpose or direction except what the leader decides, and unquestioning in its acceptance of whatever the leader decrees. What we have been watching these past few days is an exercise in raw power politics, designed as much to humiliate the individual in question as anything else. And let it be noted that a good many members of Warawa’s “team” were more than willing to take part.

Be clear: there was no earthly basis for ruling Waraw’s motion non-votable. The committee’s decision amounted to a declaration that day is night. Or rather, it was intended to send the message: we have the power to declare that day is night, and if we tell you it is, you insignificant little member of Parliament, you have no choice but to accept it.

And it is not just ordinary MPs to whom this imperious attitude extends. The Speaker was told, flat-out, that in deciding which MPs to call upon for Members Statements he had no choice other than to take whatever names were on the list given him by the party whips — though in fact there is no basis in the rules for this practice, which turns the whole purpose of Members Statements on its head.

This is what has become of MPs, then — the people we elect to represent us, the ones who are supposed to give voice to our beliefs and stand up for our interests. They may not vote, in the vast majority of cases, except as the leader tells them. They may no longer, as of this week, bring private member’s bills or motions, except those the leader accepts. They may not even speak in the House, unless the leader allows.

Pretty much the only role left to them is to read out statements or questions written for them in the leader’s office, to parrot talking points on TV panels, and to jump to their feet at regular intervals to applaud whatever tedious attack line the leader repeats in Parliament. If they do all these in perfect obsequiousness, they may be rewarded with a seat in cabinet, though even these have grown so numerous and thus inconsequential that most will find themselves with little to do but ride around in their ministerial cars all day.

People like me are inclined to look for structural causes in cases like these. But it is as much about the character of the individuals involved. Because whatever the wishes of those in power, in fact everybody has a choice in these situations. The members of the committee who voted to throw out Warawa’s motion knew they were doing a grubby, sordid thing. They did it anyway.

What we have been watching these past few days is an exercise in raw power politics, designed as much to humiliate the individual in question as anything else.

The same choice awaited every other MP. They could, as a few have done, stand up for what was right: they could protest against the leader’s abuse of power and the steady erosion of MPs’ prerogatives that made it possible. Or they could choose to pile on, and collude in their own servitude.

It is a familiar tale, of course. That so many people choose to go along, not only accepting the indignity of their own station but attacking anyone who tries to improve theirs, is wholly comprehensible. The seductiveness of compromise; the desire to be “realistic”; the pressure to conform; the fear of retribution; the comfort of the status quo; all conspire to condemn and discredit the “purist” who wonders, as in this case, whether MPs were really intended to be pack animals, or if they have just allowed themselves to become so.

I don’t want to make the dissenters into heroes. As others have pointed out, they have been only too willing to run with the pack in the past, to repeat the same fatuous talking points and otherwise follow instructions. What distinguishes them from their fellows is that at some point they touched bottom. Even before the squalid treatment of Warawa’s motion, and quite apart from the shameful muzzling of any and all discussion of abortion, they could see what they had become, or were becoming. Self-respect, even lately recovered, is no small thing, and while most probably had little prospect of advancement, nevertheless it took real courage to speak out. As it appears more will.

Perhaps it is less their own state than the state of the party that has moved them. The autocratic vise in whose grip the Tories now find themselves, like the peculiarly nasty partisanship for which they have become known, has its origins in the party’s earlier decision to shed itself of virtually any identifiable beliefs or principles in the name of electability.

Though they may not have quite known it at the time, in so doing the party essentially surrendered itself to the leader. For if the party does not stand for anything on its own, then it stands for whatever the leader stands for. And since what any leader wants most of all is power — that is what makes him leader — that is all that is left to the party to do: deliver him into power, and keep him there. It isn’t just abortion that Conservatives have been forbidden to debate. It’s everything. People who thought they were seeking power to put into effect certain beliefs find, having got it, that these have all been replaced. Power as a means has become power as an end. As I say, it is a very familiar tale.

There is a role for parties, of course, and in return for the benefits of membership, party members are obliged to accept certain responsibilities. If you are elected on a common platform, for example, you are honour-bound to support that platform. But just because a party takes no position on an issue does not mean its individual members may not. No platform can abolish freedom of speech, and no leader can promise to bar members from presenting private member’s motions in Parliament.

But then, it is not only the Conservative leadership that needs reminding of this. For the suppression of MPs in favour of the leader is an ill that afflicts all parties, to a greater or lesser extent. Members of all parties voted together to deprive Warawa of his rights, at the behest, you may be sure, of their respective leaders. That is whose “team” was really in action at that moment: the party leaders, who whatever their other differences, share a common interest in power, and their own possession of it.