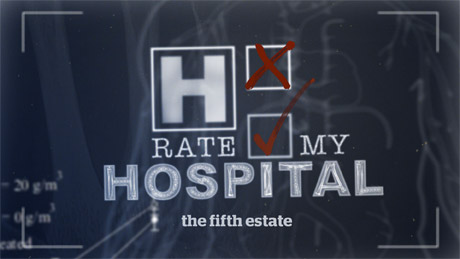 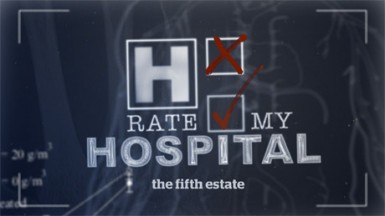 Ontario, B.C., Alberta hospitals get the highest number of ratings

The online hospital ranking tool by CBC’s the fifth estate — the first rating system of its kind in Canada — has already amassed more than 23,000 responses from across the country since its launch yesterday.

The tool went live Wednesday morning, as part of Rate My Hospital, a special project by the fifth estate looking at Canada’s hospitals.

This article was published by CBC News on April 11th,2013.  To see this article and other related articles on CBC News website, please click here

The Rate My Hospital website features profiles of more than 600 hospitals. Each hospital profile gives visitors the opportunity to rate their hospital in five categories:

Watch the fifth estate‘s Rate My Hospital special on Friday at 9 p.m. (9:30 p.m. in Newfoundland).

Users employ a five-star system to rate a hospital’s performance in each category, with one star representing poor and five stars representing excellent.

Ontario hospitals were rated the most frequently, with almost 11,000 responses. The province also has more hospitals than any other province or territory. Large teaching hospitals, like Kingston General and the Ottawa Hospital, have been rated more than 300 times each.

Hospitals in British Columbia and Alberta are the next most frequently rated. B.C.’s facilities have been ranked almost 3,500 times, while Alberta’s have received more than 2,000 responses.

As for the remaining territories and provinces:

Each hospital page on the Rate My Hospital website displays reader ratings in a box at the top. Patient reviews are for informational purposes, intended to stimulate discussion and help people with their own research about their health-care institutions. User ratings do not provide recommendation.

The user ratings are not connected to the grade that CBC gave hospitals. The fifth estate’s Rate My Hospital report card rated 239 facilities across the country, based on data reported by hospitals to the Canadian Institute for Health Information (CIHI).

The hospital ranking story was the most viewed Wednesday on CBCNews.ca, and readers left hundreds of comments. Many commenters called for more information and higher accountability from hospitals.

Hospital rankings are often intended to spark internal change, as they can “focus hospitals’ and clinicians’ attention on important quality-of-care issues that need improvement,” said Dr. Jack Tu, a member of CBC’s expert panel advising the Rate My Hospital project, and a cardiologist at the Schulich Heart Centre at Sunnybrook Hospital in Toronto.

Some hospital officials have already told CBC News they are looking forward to reviewing the rankings and analyzing their internal operations.

People in the U.K., the U.S. and other countries have been consulting similar hospital report cards to help them make informed health care choices for more than a decade.

NHS Choices, a website that allows users to rate hospitals and other health care services in England, was created by the National Health Service, the government authority that runs England’s public health system.

Researchers found that the ratings and comments posted to the site generally corresponded to patient outcomes in hospitals during the period studied.

To contact the Rate My Hospital team with tips or information related to the series, please email [email protected].