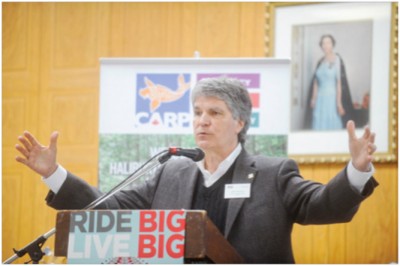 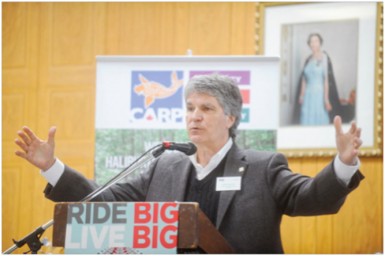 CARP vice president and general manager Ross Mayot said seniors have great political pull and can exert influence over the government when he spoke to local chapter 54 members at their Annual General Meeting at the Royal Canadian Legion in Haliburton on Sunday, April 21.

It was a day of congratulations and an opportunity to be proud of past work, but, more important, to see potential.

Bob Stinson, chairperson of the Haliburton Highlands local 54 chapter of CARP, led off the first annual general meeting in Haliburton at the Royal Canadian Legion on Sunday, April 21.

Stinson believes in this chapter. He welcomed the event’s guest speaker Ross Mayot, vice president and general manager of CARP.

Mayot reminded the audience they are part of a new vision.  A vision that includes active seniors who are proactive and take ownership of their own health.  He gave encouragement to the chapter and highlighted the strength of the membership.

Whether it is as a voting block in the political arena or lobbying for change in health care, CARP members and the organization are working to strengthen society for everyone.

Mayot added it is the local chapters that give CARP its strength. There are 57 chapters across the country from St. Johns to Victoria and Chapter 54 has the potential to be among the best.
“This team will become a rising a star in our network,” he said.

He reminded the audience to remember 54 when re-applying for membership, as it is key to the local chapter receiving funds.

The first AGM was a full house with over 120 in attendance. The excellent hot buffet lunch provided by the Head Lake Grill was followed by a very informative speech from Ross Mayot, VP and General Manager of CARP.

The business portion of the AGM, chaired by Bob Stinson, passed motions for the acceptance of Chapter 54 Bylaws; Chapter 54 Standing Rules; Election of Directors, the financial position, and 2013-2014 budget.