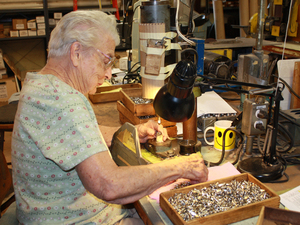 At in Needham, Mass., nearly half of the employees are senior citizens, and they are helping to keep the company well in the black.

Rows of worktables fill the modest-sized production floor of Vita Needle, located just outside Boston. A couple of dozen workers operate machines that grind and shape an assortment of tiny tubular products — needles, syringes and wires.

Not much has changed on the production floor since 1932, when Vita Needle got its start. And many of the company’s current employees got their start in life even before that.

Making The Time Go By

Rosa Finnegan has worked at Vita Needle for 13 years. She is 98 and a half — and that half, Finnegan says, is important.

On this particular day, Finnegan stamps hundreds of small metal parts that look like pencil erasers. The arthritis is visible in her hands, but the exercise from her job helps keep her fingers reasonably nimble.

“I thought retirement with my husband would be nice. But [he] passed away with a heart attack, so life changed drastically after that. My plans all went astray. I had to make new ones, so this is how I did it,” Finnegan says.

Finnegan works five hours a day, and she has found a community at Vita Needle. The company employs 20 senior citizens part-time on the production floor.

“I can go as fast or as slow as I want. No one pushes me. Makes the time go by,” Finnegan says as she stamps at her work station.

“ The retirement age was established when people didn’t live much longer than that. Now people retire and still might have a third of their life to live.

At 27, Frederick Hartman II is the youngest member of the family-run business. He serves as Vita Needle’s director of marketing and engineering.

“There’s a sense of pride in the senior citizens, in the work that they do here. Some may not work at a faster pace, but they will produce a quality product,” Hartman says.

Vita Needle is as competitive as ever, holding onto 10 percent of the market in tubular products. The company projects $9 million in sales this year.

But this phenomenon of hiring seniors is bigger than Vita Needle.

Between 1985 and 2008, the percentage of Americans working past the age of 65 rose from 11 percent to 17 percent. According to Caitrin Lynch, an associate professor of anthropology at Olin College in Needham, it doesn’t make sense anymore for people to retire at 65.

“The retirement age was established when people didn’t live much longer than that. Now people retire and still might have a third of their life to live,” Lynch says.

Lynch says hiring seniors can make economic sense. Older workers often appreciate flexible hours, and for a business, this means affordable part-time employment. And companies do not have to provide benefits because Medicare tends to cover the seniors’ medical needs.

A Sense Of Purpose

According to Lynch, the arrangement also makes good social sense.

“Work is so much more than just a paycheck. I think that Vita Needle is an example of a human desire for connection with others, and having a sense of purpose,” Lynch says.

That is certainly true of Bill Ferson, who is 92 and has been at Vita Needle for more than 20 years. The money helps him pay his bills, but he also values the people he has met at Vita Needle.

“A lot of them are in the same boat I’m in. You’re single. You know, at my age, all my friends are gone. But I get up in the morning, I got some place to go, I got people to meet and I got something to do,” Ferson says.